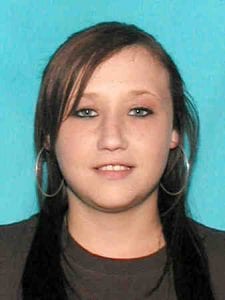 Megan Claspell, who was wanted in connection with the Rogers Corner Store robbery, has been arrested by the Avoyelles Parish Sheriff’s Office. Claspell left the Bossier area yesterday, and headed to Avoyelles Parish to her father’s residence. He apparently saw the news story and turned her in once she was back home.

Bossier Sheriff Julian Whittington says a Keithville woman is wanted in connection to an armed robbery that took place at a Haughton grocery store in February.
Detectives with the Bossier Sheriff’s Office have issued warrants for Megan Claspell, 24, of the 11,000 block of Old Mansfield Rd., Keithville, La., for armed robbery, accessory after the fact, possession of a Schedule II controlled dangerous substance, and drug paraphernalia.
Claspell, is described as a white female, with red hair and blue eyes. She has a tattoo on her neck and right leg and may be frequenting the area of Diamond Jacks Casino and Hotel in Bossier City. She may have also changed her hair color and could be going by a different name. Detectives believe she could be three months pregnant.
Earlier this month, the Bossier Sheriff’s Office arrested four in connection with the armed robbery of Rogers Corner Store in Haughton. One of those, Austin Holt, is the boyfriend of Claspell. Holt was arrested for accessory after the fact, armed robbery, possession of a Schedule II controlled dangerous substance, and possession of drug paraphernalia.
If you know the whereabouts of Claspell, you are asked to contact the Bossier Sheriff’s Office at (318) 965-2203.