Tift is excited about the move and what it brings to the area.

“My heart has been here since the first time I opened the business,” she said. “I’m really drawn to downtown Bossier.” 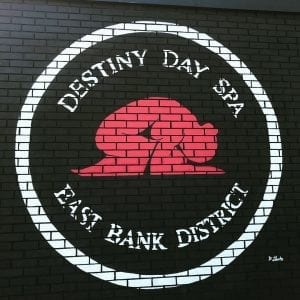 “That area just wasn’t developing back then and there was so much potential for it to happen,” she said.

She decided to move to the Louisiana Boardwalk in 2006. It just didn’t feel like home, though.

“I was born and raised here. You feel compelled to revive it and keep it alive,” she said. “What’s cool is when people come in and they remember the history of these buildings. There’s so much history here.”

Tift also owns  Retro 521 Coffee & Event Venue at 521 Barksdale Boulevard, conveniently just down the road from Destiny Day Spa. She is also planning to open another business on Ogilvie Street, just behind the coffee shop – The Evelyn Clair: A Bed & Breakfast.

“Our vision is a courtyard to connect the three houses with landscaping, wrap around fencing and cobble stone walkways,” Tift said. “You can have your wedding ceremony and reception then stay the night there.”

The bed & breakfast is named in memory of Evelyn Clair Hollis Hall, who passed away in January 2015. Evelyn was born January 4, 1930 in Bossier City.

A graduate of Bossier High School’s Class of 1947, Evelyn was crowned Miss Shreveport 1947 and also Miss Semper Fi. She graduated from Northwestern State University in Natchitoches in 1951.

Evelyn taught algebra and music at Rusheon Junior High School in Bossier in the late fifties through the mid-sixties.  She was a longtime member of The First Baptist Church of Bossier City.

There’s no timeline for construction or an opening date for the new business, but Tift said the bed & breakfast will be a great addition to the East Bank District.

“My goal is to make it all businesses work together,” she said. “We have spa amenities, an event venue, catering, a coffee shop and now a bed & breakfast. We’re excited for what’s to come.”