U.S. Senator Mary L. Landrieu, D-La., met Thursday with top military officials from the Air Force and Department of Defense (DOD) and urged them to complete the process of elevating the Global Strike Command (GSC) house at Barksdale Air Force Base (AFB) to a fourth star general and recommend the individual who will assume command.

The Secretary of the Air Force, Deborah Lee James, and Assistant Secretary for Global Strategic Affairs (GSA), Madelyn Creedon, Office of the Secretary of Defense, participated in the meeting with Sen. Landrieu.View a photo from today’s meeting here. 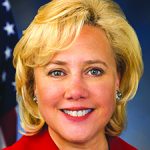 “Over the years, Barksdale has proven its importance to the Air Force and the country’s national security. Five years ago, I led the Louisiana Congressional delegation to ensure the Global Strike Command was located at Barksdale,” said Sen. Landrieu. “Today in my meeting with Air Force Secretary James and Defense Assistant Secretary Creedon, I stressed the need for the Air Force to quickly finish the process of elevating the Global Strike Commander to a four-star general and name a qualified individual to lead this important military command. I’m committed to doing everything I can to ensure this process is done in a timely manner. The men and women and their families at Barksdale and the Global Strike Command continue to demonstrate their commitment to protect and serve our country, and the Shreveport-Bossier community is proud to serve as the Air Force’s premier nuclear command.”

On July 17, Sen. Landrieu successfully included language in the DOD’s funding bill for 2015 requiring the Air Force to detail a plan to modernize the nation’s five nuclear storage areas, including Barksdale AFB.