The Bossier Parish Sheriff’s Office is investigating a one vehicle accident that closed both eastbound lanes of Interstate 20 near Haughton for a brief time late Saturday morning.

The Bossier Sheriff’s Office reports that the driver of the vehicle was transported by Life Air Rescue to University Health in Shreveport just before 1 p.m. Saturday. BSO further reports that deputies notified the driver’s family members of the crash. According to original reports, the driver was listed to be in very critical condition.

No further information has been made available at this time. The Bossier Press- Tribune news staff will have updated reports as soon as they are released.

The original press release sent to local media from the Bossier Sheriff’s office is shown below:

Both eastbound lanes of I-20 are closed between Mile Marker 30 and 31 early Saturday afternoon while deputies and firefighters work a one-vehicle crash.  Around 11:30 a.m. Saturday, a man traveling east on I-20 in a Honda Accord went off the side of the roadway and ran into the treeline.  Life Air Rescue is standing by on I-20 while firefighters and emergency responders from East 80 Fire District One and Rescue 1 are extracting the driver of the vehicle.  Bossier Sheriff’s Office deputies and Bossier City Police officers are ensuring traffic safety during this time, and we will inform you as soon as I-20 is back up and running.

Motorists traveling eastbound on I-20 need to exit at I-220 at Mile Marker 26, where they can proceed eastbound on Highway 80 until they reach Highway 157, which will take them to Mile Marker 33 on I-20 to continue eastbound. 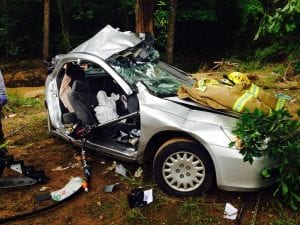