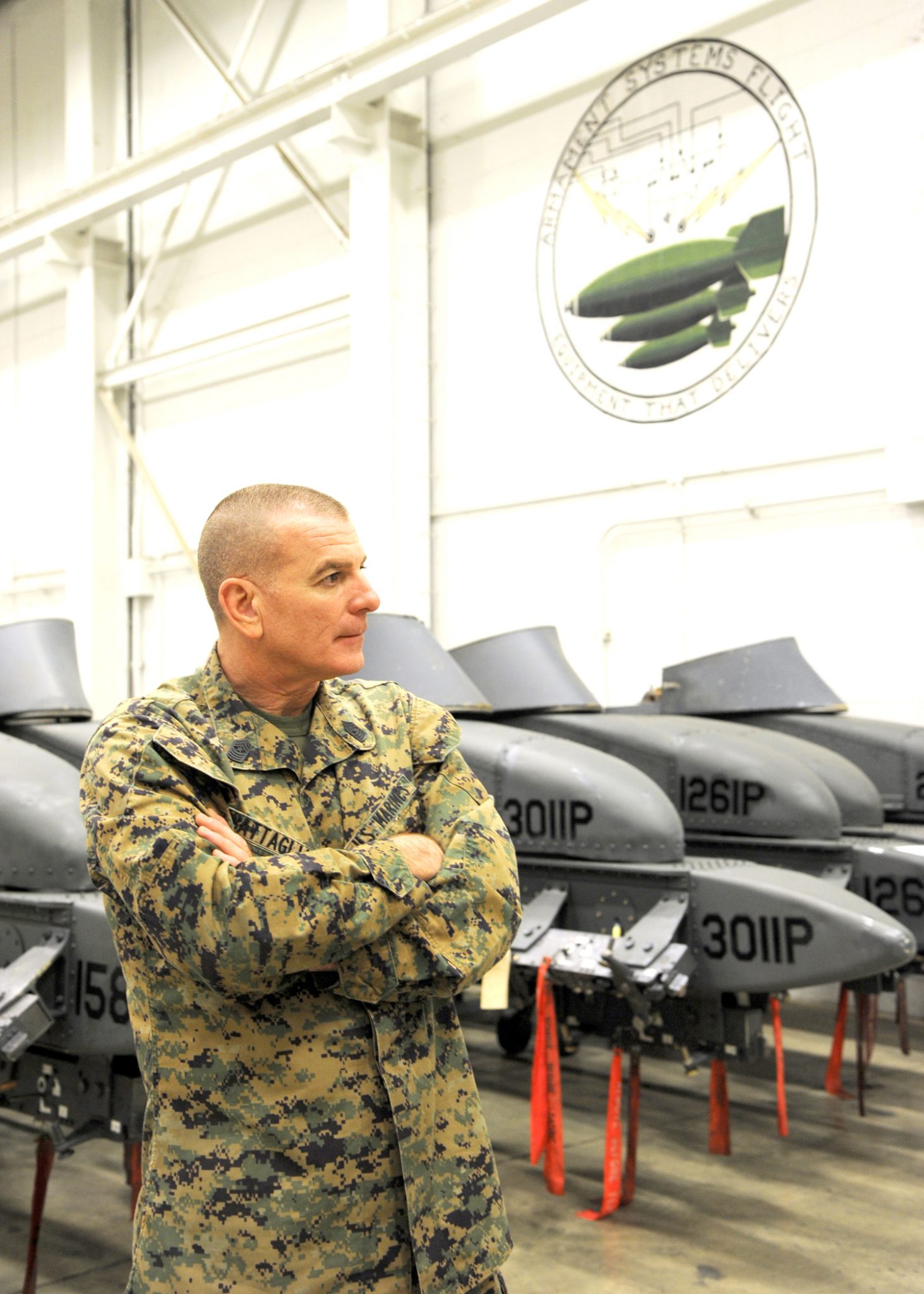 BARKSDALE AIR FORCE BASE — The senior enlisted advisor to the chairman of the Joint Chiefs of Staff visited the 2nd Bomb Wing Jan. 30-31 to interact with Airmen and gain a better understanding for the mission here.

Over the course of two days, U.S. Marine Corps Sgt. Maj. Bryan Battaglia met with Airmen of all ranks and job-types.

“This visit was part of my initiation into the nuclear enterprise,” said Battaglia. “I also got the opportunity to provide leadership development for the newly selected chiefs who continue do great things as senior enlisted in the Air Force.”

“Our Airmen displayed the pride and enthusiasm that has made us a wing for others to emulate,” said Storms. “He came away with a better understanding and appreciation of why we are so good at what we do… providing nuclear, conventional and expeditionary support to conduct global operations.”

During his visit, Battaglia provided insights on a range of issues, including force shaping and the new mandatory Transition GPS system.

“If you’re a recipient of force shaping we have a great curriculum in the armed forces called the transition GPS,” said Battaglia. “It’s a mandatory course that prepares military members to separate.”

Reshaping is a mechanism that will affect every branch of the armed services and is part of the cycle that happens to all services after every major conflict; we need to our noncommissioned officers and commanders to ensure those Airmen are getting into the transition process in an appropriate amount of time he added.

The SEAC spent time listening to Airmen’s thoughts on topics like force shaping and will take what he learns back to the Pentagon and Beltway.

“Being the SEAC has provided me the opportunity to express my views in a larger audience,” said Battaglia. “It allows me to visit all military members, who can provide me, as well as the audience I’m entertaining or presenting to, express others views, opinions and recommendations with how we see leadership and how we can help maintain good order and discipline.”

Throughout his tour, Airmen had the opportunity to ask questions and receive feedback.

“I thought he had an inspiring message of not only advancing in your career and leadership, but planning for your future,” said Senior Airman Jennifer Mancini, 2nd Medical Group Public Health specialist. “With the threat of the force shaping upon all of us, Sgt. Maj. Battaglia explained that the military has always been just a stepping stone for each of us to the next chapter of our lives.”

Battaglia explained that whether an Airman serves four or 20 years, every career has a shelf life.

“He said it is important that we remain vigilant in preparation for that,” said Mancini. “I also appreciated the fact that when he discussed problems we may face among different branches of service that they were not just Air Force problems or Army problems, but they were our problems. It really reinforced one team, one fight for me.”

The sergeant major toured the military working dogs facility, Explosive Ordnance Disposal, Airman Leadership School and other units in order to gain an in-depth look at the daily operations across the 2nd Bomb Wing.

“I’d be remised not to say I have another level of appreciation for what Airmen do, and not just at Barksdale but throughout the nuclear enterprise,” he said. “Sometimes the Airmen forget the role that they play within the bigger picture.”

In the business of deterrence and prevention, Battaglia wanted Airmen to remember to give themselves credit for their work they do.

“Everybody contributes,” he said. “Never cut yourself short as to the contribution you are making.”

Before departing the base, Battaglia expressed his admiration for the Airman he met on this visit.

“I applaud the efforts our Airmen are doing day in and day out, said Battaglia. “It’s a pleasure to come see Airmen and listen to them talk about their jobs, roles and responsibilities.”