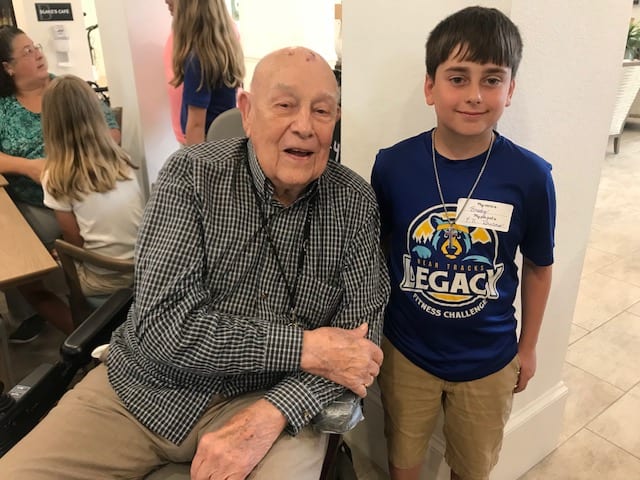 They may be generations apart, but fourth grade students at Legacy Elementary learned they have many things in common with their new friends at The Blake of Bossier City, not to mention they formed lasting bonds.

Legacy ELA teachers Jennifer Hartley and Libbi Lange came up with the idea to begin a Pen Pal Program and connect their students with residents at the assisted living facility. At school, they discussed how people communicated through letter writing before the age of technology. Hartley said it also gave students the chance to review cursive letters and writing formats.

What happened next exceeded their wildest expectations. Over the past few months, students and residents exchanged letters, getting to know each other through their life stories, some of them deeply personal.

“It has been fun seeing the excitement in my students’ faces opening their letters and reading them to learn more about someone from a different generation and time,” Hartley said. “Some of our pen pals are even World War II veterans and have shared their stories.”

Their enthusiasm bubbled over when students learned The Blake was hosting a Pen Pal Reveal Party and they would get to meet the men and women behind the letters and put faces to them. After each resident and staff member was introduced, their younger pen pals eagerly went to meet them face to face.

Meador’s pen pal was 98-year-old Pleasant Burns, a World War II Army veteran, who cried as the two talked. Brody never left Burns’ side, except to fetch him a cookie and punch.

“I thought it was cool he was a World War II veteran,” Meador said. “He told me he went all over the world twice.”

Legacy student Macee Downey learned her pen pal, Carolyn Flanagan, likes movies and to go out to eat. As for Flanagan’s writing buddy?

“She’s getting a horse! I told her I would like to go see her barrel race,” Flanagan said proudly.

Clarence Boose, also a World War II Air Force veteran, came bearing gifts for his pen pal, Parker Dean. The two rocked in chairs and chatted as if they had known each other for years. One thing Boose said they wrote about in their letters was how school has changed over the decades.

“When I was in school, whoever heard of keyboarding?” Boose said. “We were graded on penmanship. One common thread, though, is math because 2+2 is still 4.”

Hartley was deeply moved by the scene that played out in front of her and the stories students have since shared since the Pen Pal Reveal. It is something Hartley hopes to continue each year, teaching not only the lost art of letter writing, but bridging the perceived generation gap that may really not be as wide as one might think.