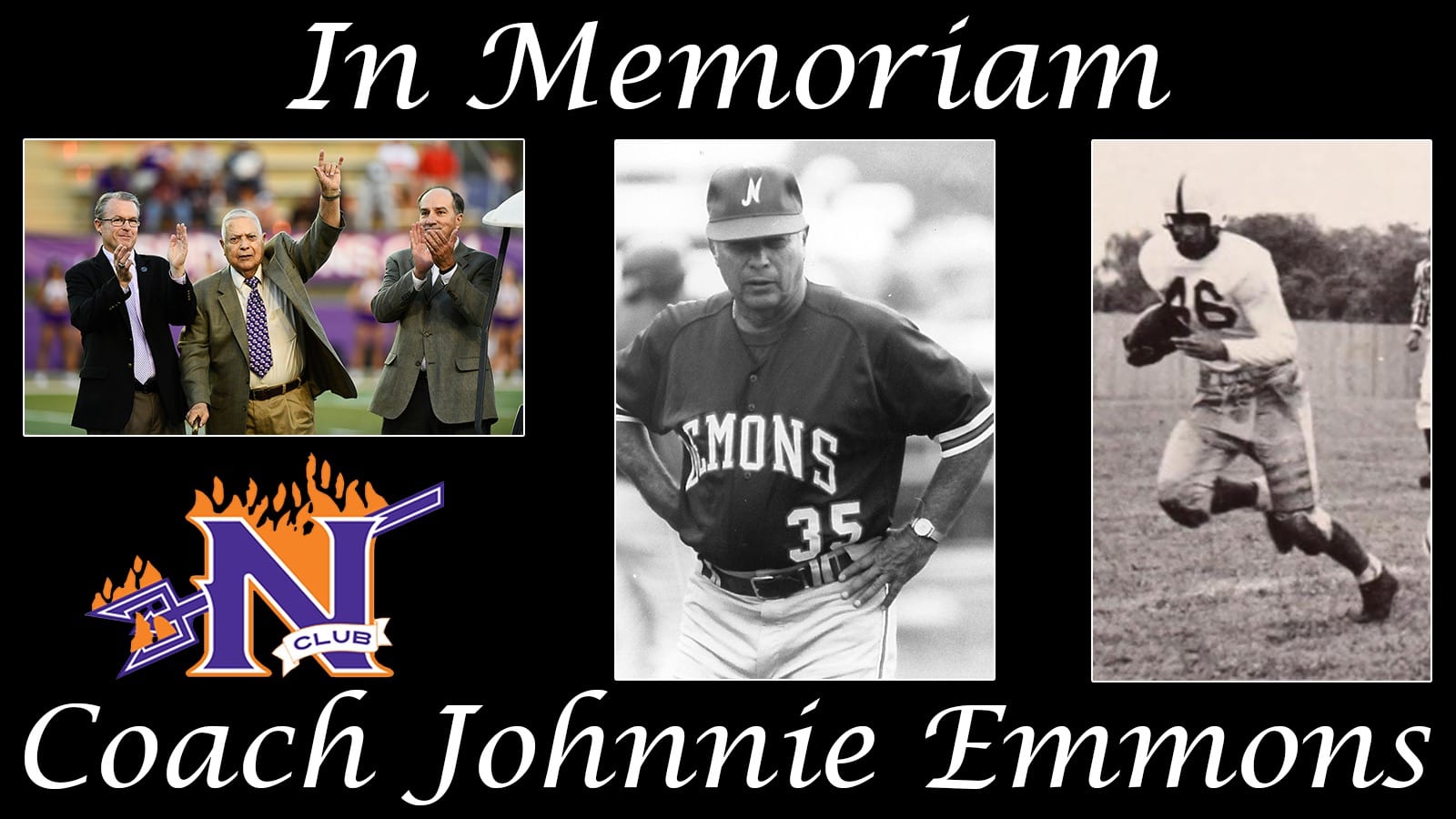 Funeral arrangements will be announced soon.  Emmons, 91, was in declining health since last August.

One of the Demons’ all-time great football and baseball players, Emmons was the architect of a nationally-ranked men’s tennis program in the 1970s at Northwestern, and was the founder of the highly-accomplished Lady Demons tennis program.

A 1973 N Club Hall of Fame selection, Emmons was among the most remarkable athletes and sportsmen in Demon history. Emmons made the Top 100 Demon Football Players of the Century list in 2007 and remains baseball’s record-holder with a .458 batting average in 1952.

Before returning to his alma mater to coach in 1969, Emmons was a very successful high school head football coach. He was an NSU football assistant coach for nearly a decade while also serving as men’s tennis coach, and taught health and physical education classes.

He served as head baseball coach of the Demons from 1986-89, when he retired. Emmons remained professionally active as a student teachers’ observer for the university’s education department for more than a decade, helping counsel future educators.

After graduating from NSU in 1951 with a bachelor’s degree in physical education with a minor in mathematics, Emmons earned a master’s in P.E. at Louisiana Tech and completed plus 30 at NSU.

He was enshrined in NSU’s Gallaspy College of Education and Human Development Hall of Distinguished Educators last October.

A halfback and quarterback in football at 150 pounds from 1948-51, Emmons shares the single-game school record with three touchdown receptions against McNeese as a senior. He scored six TDs rushing in his first two games as a Demon before leg injuries hampered his progress.  He threw an 80-yard TD pass in 1949 that still ranks sixth-longest in school history.

As a centerfielder on the baseball team, he won two Gulf States Conference battling titles, hitting .350 as a sophomore and tearing up the ballparks in his senior year of 1952 . He soon entered the baseball coaching ranks in Bernice in the Big 8 League, winning five league titles and finishing second the other two years.

Emmons joined the Demons’ staff in 1969 as a football assistant under Glenn Gossett, and also became tennis coach by default. Within 10 years, he had the Demons tennis team ranked in the Top 20 in the nation. He launched women’s tennis at NSU before taking over the baseball head coaching post in 1986.

After his retirement, Emmons was ubiquitous at virtually every NSU home sports event for the last 30 years of his life, until becoming ill last August. Emmons also frequented most football practices and some baseball workouts.

He was a founding member of the Walter P. Ledet Coffee Club of Natchitoches.