Today begins a 4-part series examining the view of local legislators on the upcoming session.

With the Louisiana Legislative Session less than a month away, the mood is unusually subdued.

State Representative Henry Burns, R-Haughton, says the main issue of the non-fiscal session will be “Where will the money come from and where will it go?”

“We’re starting to show a slight increase in revenue, but there’s no way to meet all the demands. We’ll have to use our best judgement for appropriating those funds to the best of the state,” said Burns. 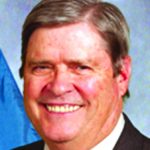 This budget also includes a $141.5 million increase in higher education funding and increases for health care, after years of repeated slashing in these two sectors to help balance declining state revenues.

When asked if the axe would drop again on higher education and healthcare, Burns said, “I hope not.”

“I’m hoping that as the public hospitals that transitioned to private institutions some public get up and running and more seasoned we’ll be able to accommodate costs and get control on the ever spiraling cost of health care,” Burns said.

He warned the emotionally charged subjects this year will involve cost of living and retirement funding.

“When you set standards in the past and can’t live up to them, it puts additional demands on you. You make government smaller but when you eliminate 28,000 jobs, that’s 28,000 less people paying in (to retirement system),” Burns explained.

As for his personal bills, the most controversial bill, perhaps in all of the session, is HB10, which would do away with a state law that bars off-duty law enforcement officers from carrying firearms into any establishment where alcohol is served for consumption.

“To disallow trained professionals that daily work with their guns access to their firearms while they’re out eating in an Applebee’s or Chili’s, doesn’t make sense. Police officers have to eat, too,” Burns previously told the Press-Tribune. “That’s the person I would want to have their gun.”

The bill was introduced in last year’s session before being killed in committee. Burns said there’s more support this time around, with law enforcement leadership in Baton Rouge asking for the bill to include a component that local department rules and regulations on this subject would apply.

Burns believes the bill will come to be viewed as his controversial “guns in church” bill, HB68, was in 2010.

“Once everyone understood that it was to provide security and in the church’s best interest to inspect all safety aspects – marital problems, mental illness, police patrols, etc. – there are things you can do to make a place safer than by having someone there with a gun.”

He is also excited about HB 163, which would modify the PARCC assessment — a test that aims to examine a student’s college and career readiness.

He said the real key is making the test more rigorous.

“I suggested an alternative (to the PARCC) of a more rigorous LEAP test. I’ve heard from both supportive and dissident groups that the education community is really liking my bill. When I go to speak at different schools from time to time about civics, I mention I have that legislation and the teachers give me a hand,” he laughed.