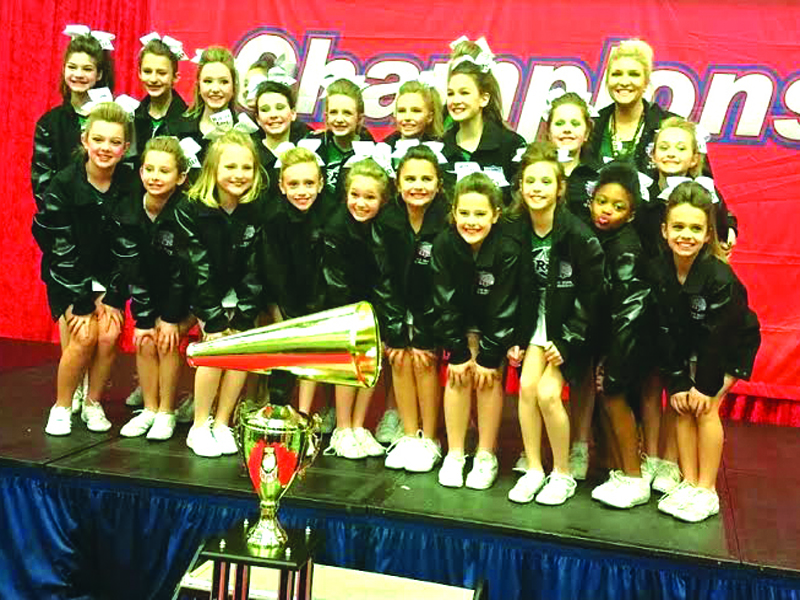 A local cheer team is headed to Florida to compete to be the best athletes in the country.

Team Glory received one of only twenty-five invitations awarded at NCA All-star Nationals to compete at “The Summit,” the highest level of competition the team can attend.

This competition is known in the industry as the most prestigious event for levels 1 through 4 of competitive cheerleading. Only 500 teams nation-wide are invited to compete at this event and Team Glory is the first team from the Shreveport-based gym to compete.

Bossier residents Alexis Danard, Cameron Zavala and Kayllie Coco said this has been nothing short of a “Cinderella season.”

“We’ve come a long way since last summer,” Kayllie Coco, 11, said. “Our skills have improved and we’ve bonded as a team. Win or lose, it’s a blessing to be together and experience the Summit with this team.”

Team Glory has spent many hours in the gym since winning the NCA level 2 small youth division championship. Kindall Pryor, head coach of Team Glory, said this team has really defied the odds since day one.

Of the 20 member team, only three were returning all-star members. The rest, Pryor said, were either new to this level of competition or completely new to all-star competitive cheerleading.

“They really had to start over from the basics and build up,” she said. “They really learned to appreciate the little things and that made the NCA win even more special.”

Pryor told the team they had one goal going into the Dallas competition – to perform your best.

“It’s easy to let nerves take over,” she explained. “We usually have set expectations, but we just wanted them to hit the routine and have fun doing it.”

Team Glory proved themselves after the first day of competition. They were in first place entering day two, but couldn’t settle for anything less than perfect.

“We try to own every second,” Cameron Zavala, 10, said. “Even when we have bad practices, we overcome it as a team. If you work hard you get something bigger in return.”

Their hard work paid off.  Team Glory was one of five level 2 teams given a bid to the ‘invite only’ competition.

Alexis Danard, 11, said there were many mixed emotions and many tears of joy.

“We motivate each other and come together when we need it,” Danard, a first year all-star member, said. “I’m very proud of this team.”

A new challenge lies ahead, though. The Summit is an elimination competition. Their goal, Pryor said, is to make it to day two.

“We aren’t putting pressure on them,” she said. “If they go in and do their routine, they will make it.”

No matter the outcome, this performance will be bittersweet for Team Glory.

“I’m excited to be on the mat with this team for the last time,” Coco said. “We won’t be together on a team next year. Some are moving up a level, some will be on the same team.  We’ve come so far together.”

Teams will participate in competition May 1-2. The top nine qualifiers after Saturday advance to the final placements May 3. The event will be broadcast on ESPN 3 and streamed live on varsity.com.

The Louisiana Rebel All-Stars is a competitive cheer program made up of sixteen show and competitive cheer teams, ranging in age from four to eighteen. These young athletes compete in national competitions all over the region and country.