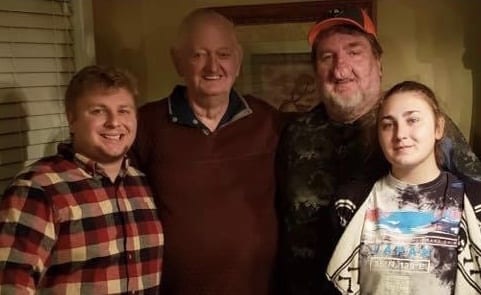 Genuine, a great storyteller and an “amazing coach.”

Those were just a few of the words used to describe longtime Bossier Parish educator and coach Kevin Black, who died Saturday evening, according to a Facebook post by his sister, Vicki Black Ball.

Black, who retired after the 2019-20 school year, had been hospitalized with COVID-19 for over a week, according to his sister’s posts.

“Kevin touched so many people during his years as a dedicated football, track, and soccer coach at Bossier High School and our alma mater, Parkway High School,” Ball wrote.  “He loved those kids as if they were his own and loved coaching. My heart is breaking for my dad who has been his retirement buddy the past few months and for his children, Ryan and Katie, who were his pride and joy!”

“He was really genuine,” Falting said in a phone interview. “He didn’t act differently around different people. He was like who he was all the time. With us as coaching buddies, with the students, with his kids he just had a genuine heart for everybody. That always impresses me when what you see is what you get out of somebody.

“He  had a saying that every time we went to a meet he and I were back-to-back with butter knives,” Falting said with a laugh. “That was always kind of our slogan.”

Falting recalled Black as someone who was “positive about everything.”

“He found a way to turn everything into kind of something funny or a joke to lighten the mood,” he said. “It always made practice something like where we were never stressed. We just got to enjoy coaching the kids and being around each other.

“Like even if anyone did something stupid within a minute or two he’d make you laugh about it. It really was a blessing to get to coach with him all these years. He kind of had a way about him in terms of coaching. If he wanted you to jump higher or run faster he’d just yell louder. Somehow people just responded to that. It was a pretty old-school coaching method but it definitely worked.”

Bossier principal David Thrash saw a little different side of Black, who left for Parkway in 2007.

“That’s what I saw with him at Bossier. His calm demeanor paid dividends for him with kids. … They played hard for him.  He’s just been a fixture of Bossier Parish for so long. … He was a players’ coach. He’s always looked out for the kids. It’s just a tragedy.”

Longtime Parkway teacher and assistant coach Eddie Pentecost and Black played sports and  graduated from Parkway together in 1980. Black was an offensive lineman.

They coached together for more than 10 years at their alma mater.

“Kevin is one of those guys who is a great coach, great dad, great friend,” Pentecost said. “He was just one of the best guys you’d ever get around. Everybody loved him. He was the storyteller and kept everybody laughing and stuff. That was his role.

Black’s son, Ryan, and daughter, Katie, are both Parkway graduates. Ryan was an All-Parish linebacker and outfielder. Katie was a standout bowler.

“Those are pretty special kids,” said Pentecost, who coached Ryan. “He was rightfully proud of those two.”

As an assistant football coach under David Feaster, Black was part of a run of some of the best teams in Bossier Parish history. In 2013, the Panthers became the first parish team to play for a state championship in the Superdome.

“Rest in Peace, Kevin Black,” wrote Brandon Harris, the quarterback on the 2013 5A runner-up team. “You were one of a kind. Your coaching & emotions you poured into people for years are unmatched. I’ll forever hold on to the speeches you gave weekly before facing an opponent. There will never be another person like you. My Prayers are with Coach Black’s entire family during this difficult time. Coach, Please continue to watch over us; you no longer have to suffer.”

“All you have to do is look at your timeline to see what Kevin Black meant to so many people,” Parkway assistant coach Brian Rayner wrote. “To me he was a friend, co-coach, motivator, and the best story teller. Rest well Coach Black, I will be one of the many who will miss your joyful spirit. #boom #back2backwithbutterknives #loyalforever.

“Coach Black had one of the biggest impacts in my life,” former offensive lineman Miles Landingham wrote. “He’s everything you wanted in a coach! From pee wee to Parkway he was there for me. I’ll never forget the big hugs and the words of advice. He will be missed big time!”

“Rest In Peace Coach Kevin Black,” wrote linebacker Adam Johnson Jr., a 2020 graduate. “You were such an amazing coach and taught me so much. You were the first person to show me how to properly lift weights and would always make football practice exciting with your competitive spirit. I’ll never forget all the laughs and jokes we made towards each other and the brief conversation everyday in the hall in between classes. You would always put your arm around everyone and say the most encouraging things. Heaven gained a great one.”

“My heart is truly broken at the loss of this man,” wrote former track and field athlete Haley Sepulvado. “He was and will always be a staple to Parkway High School. He took a chance on a teenage girl and always pushed me to be my best. In the class room, on the court and on the field. I can remember him always being so proud of me during track season for “chunking that thing”. I will never forget all the spit cups he had hidden in his cabinets and the days we spent jamming to Pandora in his class. His compassion and love for everybody that crossed his path will never be forgotten. Rest In Peace, Coach.”