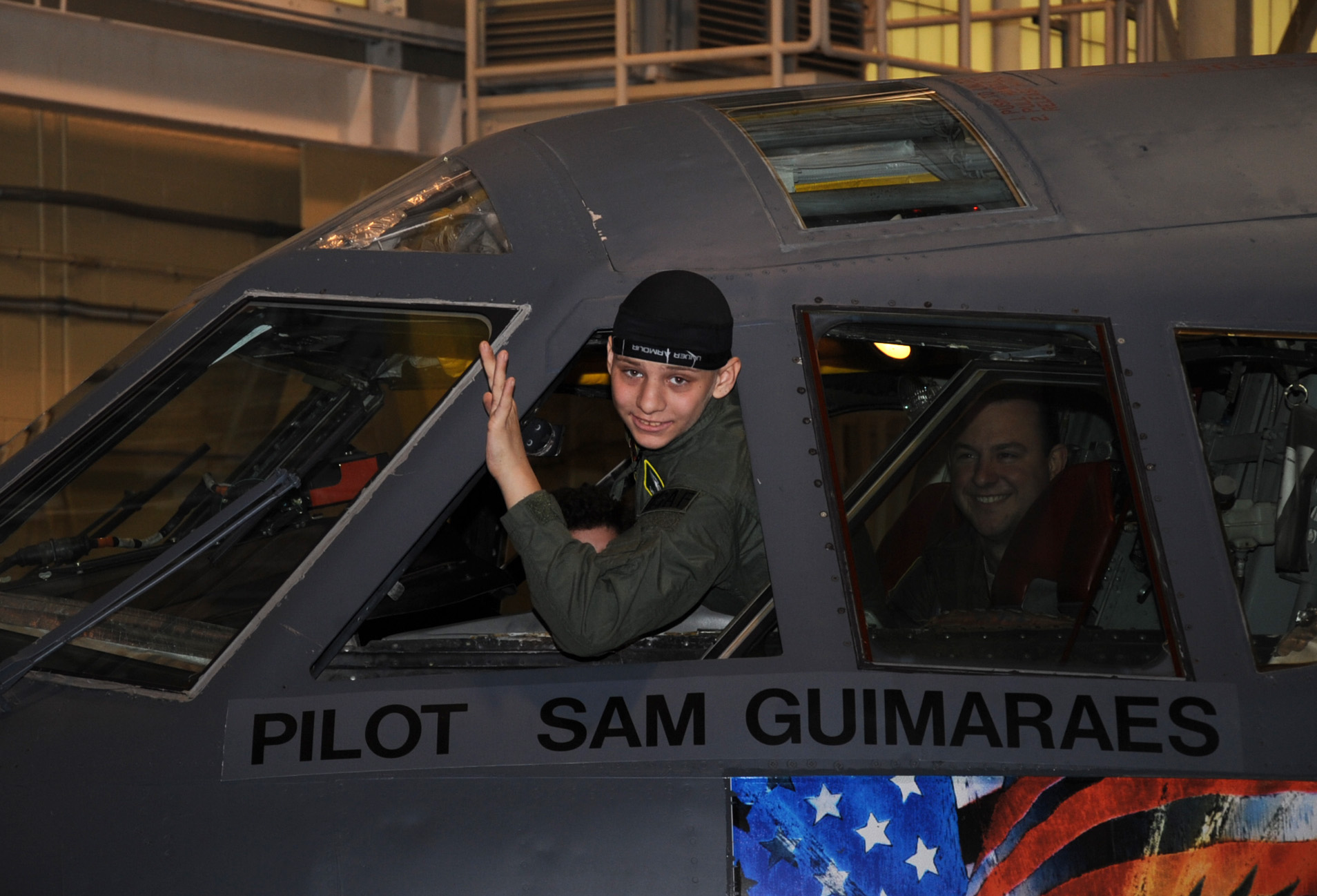 BARKSDALE AIR FORCE BASE — Sam Guimaraes, 17-year old native from Alexandria, La., was given the chance to become an honorary member of Barksdale Air Force Base, La., through the Pilot for a Day program, Jan. 4.

The goal of the Pilot for a Day program is to provide children who have serious or chronic medical conditions and their families the opportunity to see firsthand what Airmen do to support the Barksdale mission.

Sam was diagnosed with an extremely aggressive form of cancer in 2012. He was very interested in the military and had a wish to visit Barksdale. Upon hearing this, Team Barksdale came together to make it happen.

“Last week, I got a call about Sam and his family,” said Lt. Col. Chad Bigelow, 2nd Bomb Wing Command Post. “One thing they wanted to do was to come out to Barksdale and see the base for a day. Within a week, and with the help of Team Barksdale, we were able to come together and make this happen for them.”

The day began with Sam and his family arriving on base, where Sam was presented with his very own flight suit, before attending a crew brief alongside aircrew from the 96th Bomb Squadron where he received squadron patches and coins to add to his collection.

From there, he received a tour of a B-52H Stratofortress from Airmen of the 2nd Maintenance Squadron and a munitions display from the 2nd Munitions Squadron. His day concluded with a ride in a B-52 simulator.

“I got to sit in the cockpit of the B-52, which had my name on the side of it,” said Sam. “This was a big surprise to me. I was also able to try on helmets and survival vest that aircrew members use. It meant a lot to be able to come here today and look at all the stuff they had for me.”

Every person who came in contact with Sam, had nothing but positive things to say about this upbeat and influential teen.

“Meeting Sam allowed me to take a pause from the hustle and bustle of the operational environment and allowed me to get a better perspective on our operations here and the impact they have on our local community,” said Bigelow.

Sam and his family were very thankful and respected what the men and women of Team Barksdale did for them on this special day.

“We cannot thank people enough for what they have done for us today,” said Denise Guimaraes, Sam’s mother. “It’s a great feeling that people can care this much and give their time, patience and energy toward this. It is nice to know there are these kind of people in the world out there who would give this much to make sure Sam has such an amazing day.”