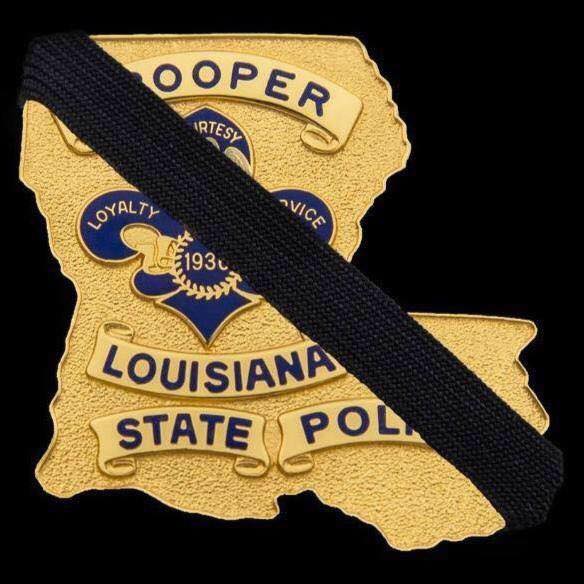 Gov. Jindal issues Executive Order for flags to be flown at half staff until August 28

Vincent was surrounded by family and friends when he died.  Vincent becomes the first trooper killed in a hostile encounter since the murder of Trooper Donald Cleveland near Lafayette in 1977.

“We knew last night that Trooper Vincent’s condition was grave, and despite valiant efforts by medical staff at Lake Charles Memorial Hospital and prayers from throughout the country, Vincent lost his battle this morning,” Edmonson said.

Vincent had a lifelong dream of becoming a state trooper and after spending nearly 10 years with the Lake Charles Police Department he joined the state police in 2003.  His career was distinguished and his service had repeatedly been recognized.  During his 12 years of service he received thirteen awards and commendations including the department’s Professional Excellence and Meritorious Service Awards as well as numerous Unit Citations for his dedicated and selfless duty throughout the state.  He had also served in the United States Army during Operation Desert Shield and Operation Desert Storm.

“Trooper Vincent epitomizes all that is great about our organization.  He didn’t just believe in our core values, he lived them.  The citizens of this state were well served by Vincent, and I know they join us in our collective grief,” Edmonson said.

In an earlier message announcing Vincent’s passing, Edmonson told members of the department, “we are heartbroken over this senseless and tragic death.  Our thoughts and prayers are with his surviving wife, Katherine, and his son, Ethan, as well as his entire extended family.  Steven was proud to serve as a Louisiana State Trooper and we were proud to count him among our ranks.  This loss exacts an enormous emotional toll on the State Police family, but we will do what is necessary and proper to honor Steven and support those who knew and loved him. He will be missed but never forgotten.”

Arrangements are incomplete at this time, but Vincent will be afforded full honors associated with a line of duty death.

Governor Jindal said, “Supriya and I are deeply saddened by the loss of Trooper Steven Vincent. Steven was an honorable husband, father and State Trooper who courageously served our state for over a decade.

Brave men and women like Steven put their lives in danger every day to protect our families, and we are extremely grateful to them for keeping us safe.

Our thoughts and prayers are with Steven’s family and all of our law enforcement members as we mourn this tragic loss.”

The suspected shooter in Trooper Vincent’s death will be rebooked on charges of First Degree Murder of a Police Officer in addition to several related charges as the investigation continues.  He remains at the Calcasieu Parish Jail at this time.

For information on providing assistance to the Vincent family during this tragic time, please visit www.latroopers.org and direct donations to the Louisiana Troopers Charities.