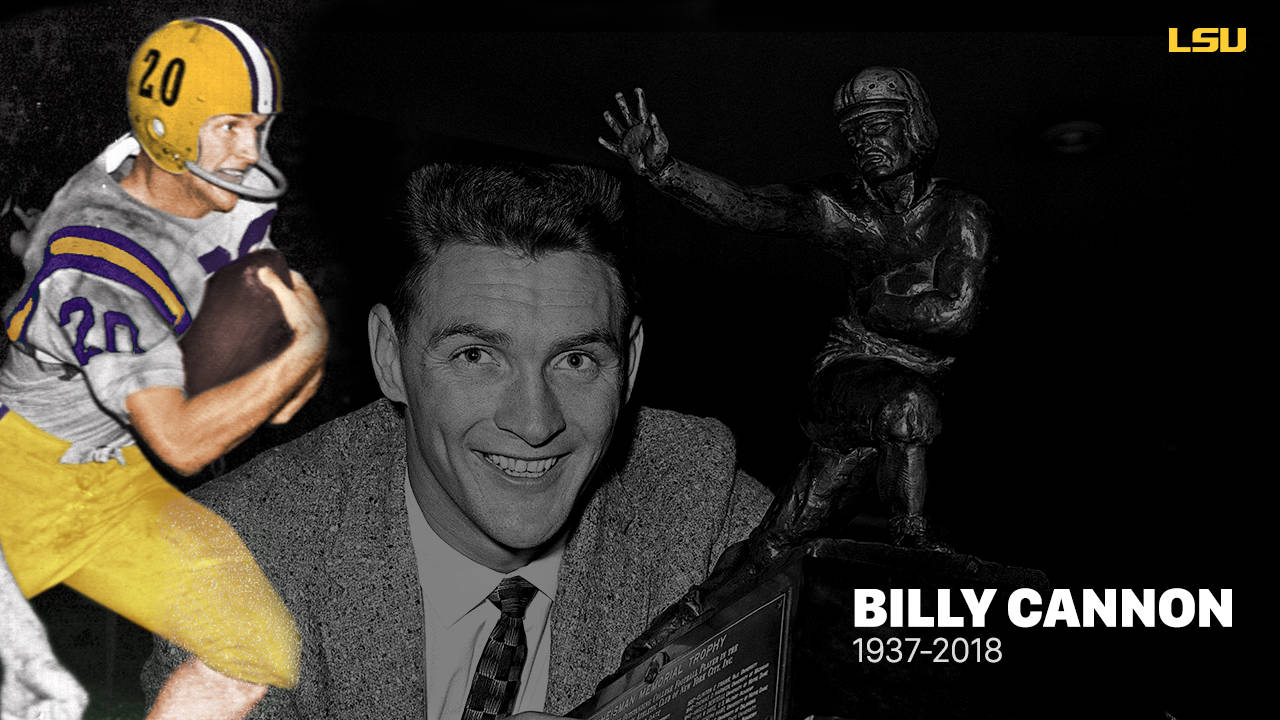 BATON ROUGE – LSU legend Billy Cannon passed away peacefully in his home early Sunday morning at the age of 80.

Cannon, a Baton Rouge native and 1959 LSU graduate, was the winner of the 1959 Heisman Trophy as a halfback, and he led the Tigers to the 1958 national championship. He was inducted into the LSU Athletic Hall of Fame in 1975 and into the College Football Hall of Fame in 2008.

“There may be no other figure in LSU sports who was more beloved and revered,” LSU Vice Chancellor and Director of Athletics Joe Alleva said. “His loss will be felt across the world today. The LSU family mourns with the Cannon family. He will always be a Tiger and will always be in our memories.”

“To say that Billy Cannon was legendary is an understatement,” LSU President Dr. F. King Alexander said. “His talent catapulted LSU Athletics into the national limelight, but more than that, he had unwavering commitment to his alma mater. He will forever remain a part of the LSU legacy throughout the nation.”

A private ceremony for Dr. Cannon is planned for early this week. Details for a public remembrance later this week will be announced. The Cannon family asks that in lieu of flowers, donations be made to Johnny Robinson’s Boys Home and the Tiger Athletic Foundation Billy Cannon Endowed Scholarship.

“Billy Cannon was LSU football through and through. He was a legend. He will be missed and never forgotten,” LSU football head coach Ed Orgeron said.

One of the most versatile players to ever wear the Purple and Gold, Cannon’s No. 20 jersey was retired by the university in 1959. The LSU Athletic Hall of Fame Committee also unanimously approved a proposal that a statue honoring Cannon be erect on campus in August 2017.

Cannon was a rare athlete, even by today’s standards, combining sprinter speed with brute strength. He could consistently run a 9.5 in the 100-yard dash and, at 6-foot-1, 210 pounds, he had the size to overpower his opponents as well as outrun them.

He was an immediate standout as a sophomore in 1957, starring on both offense and defense for LSU. As a junior in 1958, he was the driving force behind the Tigers as they carved out a perfect season and claimed the national title that season. He passed for a touchdown and kicked the extra point in LSU’s 7-0 win over Clemson in the Sugar Bowl to earn MVP honors in that game.

After the 1958 season, Cannon finished third in Heisman Trophy voting behind Pete Dawkins of Army and Randy Duncan of Iowa. Nobody else was close, and Cannon led in the South and Southwest.

Cannon’s most memorable performance came in his senior season of 1959 against Ole Miss. Top-ranked LSU trailed the third-ranked Rebels 3-0 early in the fourth quarter when Cannon fielded a punt at the LSU 11 and broke seven tackles on his way to a winning touchdown, as the Tigers won 7-3. The run helped cement the Heisman Trophy for Cannon in 1959. The radio call by then-announcer the late J. C. Politz along with the grainy black-and white film footage is regularly played on Halloween (Oct. 31), the date of the contest.

In his three-year career from 1957-59, Cannon rushed for 1,867 yards on 359 carries and scored 24 rushing touchdowns. He also caught 31 passes for 522 yards and two touchdowns. An all-purpose player who was also a defensive standout, Cannon returned 31 punts for 349 yards and 21 kickoffs for 616 yards in his career, punted 111 times for an average of 36.7 yards a punt and intercepted seven passes. He also completed 12 of 26 pass attempts for 121 yards.

In winning the Heisman in 1959, Cannon piled up 1,929 points, more than tripling runner-up Richie Lucas of Penn State. He had more points than the combined totals of the next eight players, sweeping all sections of the country.

Cannon played 11 years in professional football, the first 10 in the American Football League, helping lead the Houston Oilers to the AFL title in 1961 and 1962. He was a two-time MVP of the AFL Championship game. After a back injury in 1963, he was traded to the Oakland Raiders where he played tight end for seven years, earning All-Pro honors on Oakland’s first Super Bowl team.

Cannon prepped at Istrouma High in Baton Rouge where he was an all-state halfback leading them to an undefeated season. Cannon gained more than 100 yards in 12 or Istrouma’s 13 games and scored 33 touchdowns.

Dr. Cannon earned his D.D.S. at the University of Tennessee and a master’s at Loyola University in Chicago. He was the Director of Dentistry at the Louisiana State Penitentiary in Angola before his retirement in January.

He was inducted into the Louisiana Sports Hall of Fame in Natchitoches in 1976.