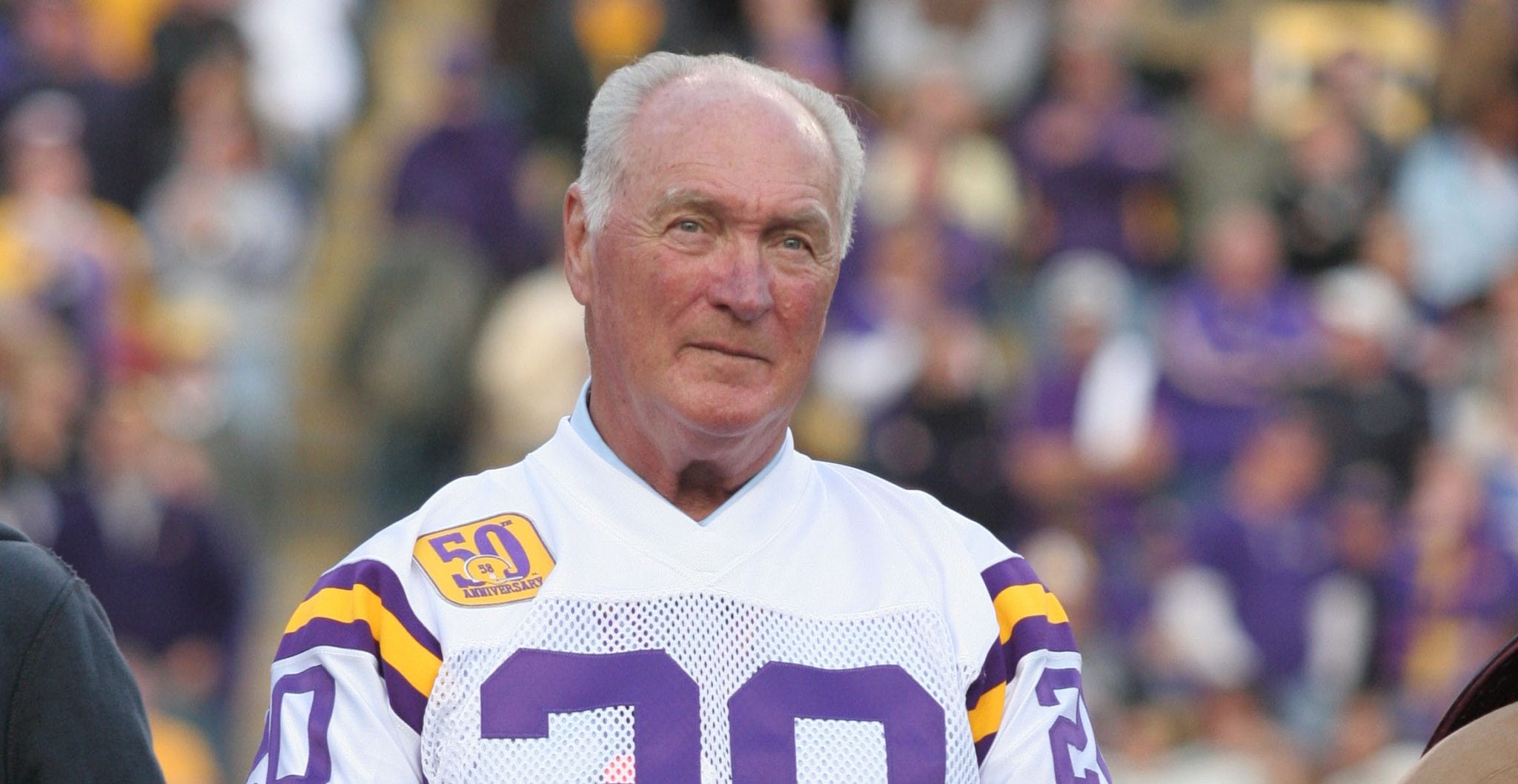 NATCHITOCHES — LSU football great Billy Cannon, the 1959 Heisman Trophy winner, will be the featured guest this Saturday from noon-3 p.m. for a book signing event at the Louisiana Sports Hall of Fame and Northwest Louisiana History Museum.

Guests attending the book signing for “Billy Cannon: The Long, Long Run” will get free admission to the museum.

The date of the book signing coincides with that evening’s announcement of the 2015 Heisman Trophy winner. Cannon is the only LSU player to win college football’s top individual honor.

Those coming into Natchitoches for the book signing can enjoy being in Louisiana’s “City of Lights” during the epic holiday display downtown, highlighted by one of the dynamic December fireworks shows on the Cane River set for 7 p.m. Live entertainment on the riverfront starts at 3:30. The Northwestern State women’s basketball team plays host to Grambling at 1 that afternoon in Prather Coliseum, about a mile south of the downtown historic district which includes the riverbank and the museum.

LSU Press officials said the appearance at the Hall of Fame museum will be the only public book signing to be attended by Dr. Cannon north of Baton Rouge in 2015.

The event was initially set for Nov. 17, but severe weather across Louisiana that day forced a postponement.

Dr. Cannon and biographer Charles deGravelles will autograph copies of the acclaimed, recently-released book “Billy Cannon: A Long, Long Run” produced by the LSU Press. The book will be on sale at the event for $30 and is also available in advance at LaSportsHall.com.

Personal inscription of books and the opportunity to meet Dr. Cannon and de Gravelles will occur from noon-1 with a question and answer session in the Atmos Energy Gallery of the museum from 1-1:30. Book signing will continue until 3 o’clock. Patrons are asked not to bring additional items to be autographed.

Dr. Cannon was inducted into the Louisiana Sports Hall of Fame in 1976 and is one of over 60 LSU sports heroes enshrined in the Hall of Fame.

The museum is located at 800 Front Street, at the north traffic circle in historic downtown Natchitoches, recently chosen as the country’s “Best Small Town in the South” by USAToday.com voters. Free parking is available on Front Street, the riverfront or one block to the rear of the museum at the Natchitoches Events Center (750 Second Street).

Online advance purchases are available at LaSportsHall.com. Those unable to attend the book signing who would like to have Dr. Cannon inscribe a personal message with those copies shipped by mail, should visit the LaSportsHall.com website. The Louisiana Sports Hall of Fame Foundation will ensure online book orders are inscribed and promptly mailed.

A year before he won the Heisman Trophy, Cannon led the Tigers to a national championship in 1958, igniting unprecedented passion for LSU and the Tiger football program that has increased through the years. But like many stories of lionized athletes who rise to the status of legend, there was a fall—and in this instance, also redemption. For the first time, deGravelles reveals in full the thrilling highs and unexpected lows of Cannon’s life, in “Billy Cannon: A Long, Long Run.”

Through conversations with Cannon, deGravelles follows the athlete-turned-reformer from his boyhood in a working-class Baton Rouge neighborhood to his sudden rush of fame as the leading high school running back in the country. Personal and previously unpublished stories about Cannon’s glory days at LSU and his stellar but controversial career in the pros, as well as details of his indictment for counterfeiting and his post-release work as staff dentist at Louisiana State Penitentiary at Angola, unfold in a riveting biography characterized by uncanny success, deep internal struggles, and a champion’s spirit that pushed through it all.

The author, deGravelles, spent over 25 years ministering to the inmates at Angola, including the men on death row. A deacon and teacher living in Baton Rouge, deGravelles has published in literary journals and anthologies nationwide.

For more information about the event and the book, contact: