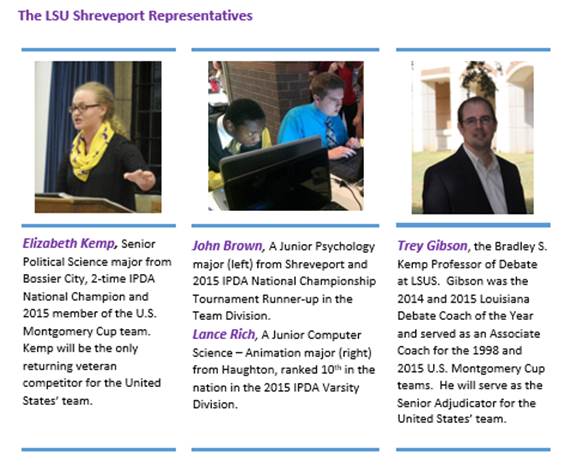 Members of the LSU Shreveport Debate Team have been asked to rejoin the United States debate team as they compete against British debaters for the Montgomery Cup.  Last year (2015), LSUS members earned 12.5 points of the 19-17 U.S. victory traveling through Scotland and England.

This Cup will take place February 28th through March 15th and will lead the U.S. team to Ireland and Scotland. A large majority of the cost of the trip is being funded through the gracious support of The LSUS Foundation and The Noel Foundation.

The Montgomery Cup Exhibition Debate Tour was instituted in 1996 by the English Speaking Debate Unions of England, Scotland, Ireland and Wales as a competitive, academic, international exchange between outstanding student debate representatives from the United States and Great Britain.  It was hoped that through educational and cultural exchanges based upon competitive, exhibition debates that our student representatives would gain greater experience in international perspectives and politics that would serve to open minds and borders.