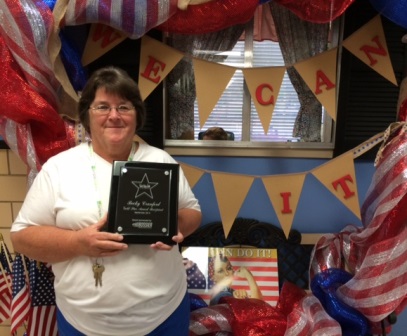 It only takes seven seconds to make a first impression, although it doesn’t take that long to figure out Becky Cranford is one special lady.

The Central Park Elementary GASP para is known by students and faculty alike as “Mama Cranford” and the nickname suits her perfectly. She is like a favorite mother or grandmother whose heart overflows with love and would bend over backward to help others in any way humanly possible.

She is typically one of the first friendly faces to greet students at Central Park when they arrive at school and head to breakfast. In fact, it was during breakfast time that Cranford was surprised by representatives from Bossier Federal Credit Union and bestowed Bossier Schools’ “Gold Star” outstanding employee award for the month of September.

Cranford’s eyes filled with tears as she was read the kind words written by colleagues who nominated her for the recognition.

Lynette Fusco said, “If we have a family or faculty member in need, Becky will organize group efforts to assure they have what they need. At Christmas she makes sure that all of our children receive something from Santa. She helps our children maintain their childhood for as long as possible.”

Others wrote, “She’s the person we all go to when we need something because we know Becky will find a way to make it happen. She loves every student at our school as if they were her own. Central Park would not be the same without her.”

“I think she’s probably the epitome of what we mean by being a family here at Central Park Elementary,” Hadden said, adding “She doesn’t hesitate to go out of her way for teachers or students.”

Ask Cranford the rewards she reaps from her job and her eyes light up, telling the story of a kindergarten student that had motioned for her to come closer.

“He kissed my cheek and he does it every morning,” she said as she smiled. “Every time one gives me a hug, that’s my reward. There’s nothing sweeter than holding a child’s hand.”

Mama Cranford’s love extends to each member of the faculty and staff, too.

“I just love them. I truly do and I know, having a daughter in the system, the personal sacrifices they make and how much money they spend in their classrooms.”

That’s why Cranford has sewn curtains for new teachers’ classrooms the last eight years. One of those educators new to Central Park this school year is Leslie Alexander, who wrote the most touching tribute of all.

“As a recent transplant from another BPSB school, I was overwhelmed through the moving process. Becky, or Mama Cranford, immediately made me feel welcome. Mama Cranford helped me learn the new processes, unpack, decorate my class and get supplies that I would need to make my transition seamless. She spent her summer helping me and other teachers get organized and ready to go … When I asked her why she was doing this instead of taking her summer off, she replied, ‘Well you are now in my family.’”

Alexander went on to say, “Her great attitude is contagious. That same attitude is carried over to students. She will do whatever she can to help the students. She greets them daily with the same care and love she gives to the teachers … If you are looking for a star, there is not one that shines brighter than Becky ‘Mama’ Cranford.”

As Cranford took in all the accolades in and was presented a plaque, cookie cake and many congratulatory hugs, she shifted the focus from herself — as she always does.

“It’s real easy to care for everybody at this school because they all love these kids and take care of each other.”