Bossier City police arrested a man early Sunday morning for stabbing another man during an altercation outside a bar.

Jose Noe Daniagua Bautista, 34, of Bossier City was arrested on charges of aggravated second degree battery and resisting an officer after police were called to the Sky Bar in the 2800 block of Barksdale Boulevard just after 2 a.m. Sunday in reference to a stabbing. Witnesses told police Bautista got into an altercation with another man in which Bautista pulled out a knife and stabbed the victim in the upper chest. Bautista them allegedly chased the man and stabbed him a second time before fleeing on foot. 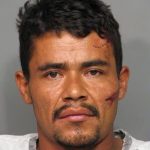 Responding officers caught up with Bautista in the 900 block of Westgate Drive as he continuing running away. Officers took Bautista into custody with the assistance of a Bossier City police dog. He was treated for dog bites at LSU Hospital in Shreveport and later booked into the Bossier City Jail.

The stabbing victim was treated at LSU Hospital for his wounds which were believed to be non-life threatening.