A Bossier City man was arrested this morning after he allegedly broke into a woman’s car and then assaulted her after she caught him in the act.

Cedarrian DeKarlos Huey, 18, of Bossier City faces charges of aggravated burglary and resisting an officer following an incident in the parking lot of the Arbor of Bossier assisted living facility in the 4700 block of Brandon Boulevard.

The victim tells police she was walking out of the facility when she saw Huey sitting inside the front seat of her car. When she confronted him Huey exited the vehicle, struck her in the face and threw her to the ground before fleeing on foot. The victim sustained minor injuries and was treated at the scene by Bossier City Fire Department personnel. 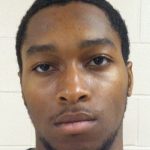 An officer who was responding to the scene saw Huey running north across East Texas Street near the intersection of Swan Lake Road. Huey ran from the officer and eventually darted into a nearby wooded area. A BCPD K-9 was able to track down Huey who was found hiding under some bushes. Huey was taken into custody and sustained a dog bite to his arm in the process. He was taken to University Health in Shreveport for treatment.

After being released from the hospital, Huey was booked into the Bossier City Jail. Along with the aggravated burglary and resisting charges, Huey was also booked for violating probation from a previous burglary conviction.