A man who was arrested and convicted of possessing child pornography more than 10 years ago has been arrested again on that same charge again as the result of an investigation initiated by the Northwest Louisiana Internet Crimes Against Children Task Force. 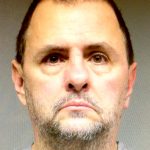 Detectives with the Bossier City Police Department’s Juvenile Unit arrested Christopher Joseph Leger, 51, of Bossier City last Thursday after executing a search warrant at his residence in the 6200 block of Ox Bow Loop. In the course of their investigation detectives seized computers from Leger’s home and found electronic files of child pornography that Leger allegedly downloaded from the Internet.

Leger was convicted of possession child pornography in 2003 and is a registered sex offender.

Leger was booked into the Bossier City Jail and subsequently transferred to the Bossier Parish Maximum Security Facility. His bond was set at $15,000. Detectives are continuing their investigation and more charges against Leger are possible.