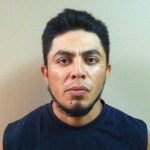 Bossier City police arrested a man this morning for stabbing his brother with a roofing knife during an altercation.

Julio Cesa, 28, of Bossier City was arrested on a charge of aggravated second degree battery for stabbing Marvin Mendez, 39, of Shreveport outside Cesa’s residence in the 600 block of McDade Street. The incident reportedly happened late Saturday night however police weren’t notified of the stabbing until just before 6 a.m. today after Mendez called a relative from the scenic overlook on the A.R. Teague Parkway just north of McDade Street stating that he had been stabbed. Mendez’s relative then called police.

Mendez was located at the scenic overlook and was taken to LSU Health Center in Shreveport by Bossier City Fire Department personnel with what was determined to be a non-life threatening stab wound to his abdomen.  Officer’s located Cesa at his residence and took him into custody.

Cesa was subsequently arrested and booked into the Bossier City Jail. He was also charged with possession of marijuana.