Detectives arrested Charles Dewayne Blue, 37, of Bossier City while conducting a surveillance operation overnight in response to three incidents this month at Lander’s Dodge in the 2700 block of Benton Road in which someone broke into the repair shop and burglarized multiple vehicles. 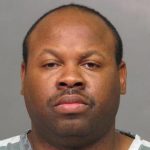 Detectives took Blue into custody at approximately 1 a.m. today after they saw him enter a vehicle that was parked in a secured area outside the repair shop. Detectives also seized Blue’s vehicle and recovered dozens of items inside that are believed to have been taken in the burglaries at Lander’s Dodge and in other recent vehicle burglaries. Those items include men’s wedding bands, two Rolex watches, gift cards, GPS navigation devices, iPods, collectable gold coins, tools and flashlights.

Blue was booked into the Bossier City Jail on burglary charges. Detectives are continuing their investigation and more charges against Blue are possible.