Melanie Bailiff has never been one to let the odds count her out of the game. If anything, being born with Cerebral Palsy has made the Airline freshman work harder to both meet and surpass the goals she sets for herself. It is paying off.

Melanie plays soccer and is on the school track team, despite having limited use of her left leg. She swims competitively, even though she only has the use of one arm, and she volunteers as an assistant coach for the Bossier Little League Challenger Division, a division of play offered to mentally and physically handicapped children.

“I love sports,” the pretty brown-haired freshman said. “That’s all I think about doing half the time.” 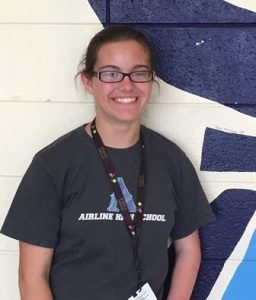 She plays hard and does it well, earning gold and silver medals in the Louisiana GUMBO (Games Uniting Mind and Body) event, the respect of her teammates and community and now, the Louisiana Public Broadcasting “Young Heroes Award.” Melanie will be honored April 27 on Louisiana Young Heroes Day in Baton Rouge, where she and the other seven recipients will enjoy lunch on the grounds of the Governor’s Mansion, followed by a banquet that evening.

This prestigious award is only bestowed statewide on eight honor students in grades 7-12 who have excelled in the classroom, served their community or shown great courage in overcoming adversity in their own lives. All three criteria apply to Melanie.

“I was pretty excited to be one in eight to get it,” Melanie said. “That’s pretty cool and an honor.”

She also gives a lot of the credit to her parents for pushing her. Doctors said she would probably never walk, but her mom and dad did not take that as a definitive answer.

“I’m glad they do. I’d rather have parents push me that saying ‘go sit over there,’” Melanie added.

Not only has Melanie become a source of inspiration for her parents, but for others, too, as a motivational speaker.

“I tell them ‘I have CP and not to let it stop you.’ I also use a favorite quote from Soul Surfer. ‘I don’t need easy, just possible.’”

She added, “I really hope people take away how much God has used me, my story, and the fact that He can use whatever is going on in your life and it will all be okay.”