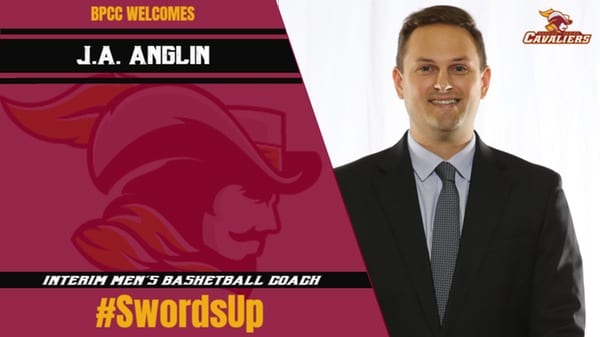 Anglin joins the Cavaliers after spending last season as the director of basketball operations at the University of New Orleans.

“With the uncertainty surrounding us all given the COVID-19 situation, we felt it would be best if we moved swiftly in the interim to find a replacement for coach Lovell,” said BPCC Athletic Director John Rennie. “Our men’s basketball program has gained national recognition over the past four years, so we knew the position would draw a lot of interest from many qualified candidates.

“With that being said, I’m ecstatic to be able to welcome coach J.A. Anglin back to northwest Louisiana and to be able to bring him to BPCC. I couldn’t have asked for a person with better character and coaching skills to step in and guide our men’s basketball program during this time. We are truly fortunate to find a coach with the knowledge and experience as well as community connections that Coach Anglin possesses.”

During his playing career, he earned a combined 91 victories and three conference titles. Anglin was on the 2005-06 NSU Demons’ team that upset third-seeded Iowa in the NCAA Tournament.

“I want to thank Dr. Bateman, Karen Recchia and John Rennie for giving me this opportunity,” said Anglin. “Having grown up in the area, I have always followed the Bossier Parish Community College basketball program. Being the head coach at BPCC is a dream come true. My goal is to give the college and community a basketball program that they can be proud of. I will work tirelessly to help our student-athletes succeed as people, students, and basketball players.

“My wife and I are looking forward to seeing familiar faces and building new relationships throughout our community. I’ve never been more excited in my career.”

As the director of basketball operations under coach Mark Slessinger at UNO, Anglin coordinated team travel, scouted opponents, assisted with scheduling of future opponents as well as assisted with recruiting. In the 2019-20 season, the Privateers saw Bryson Robinson cap off his Privateer career as the programs single-season leader in three-pointers made.

Robinson was named All-Southland Conference while finishing third in the league in scoring.

In 2018, Anglin was the associate head coach at LSU Shreveport. The Pilots went 23-11 in Anglin’s first season with a win in the first round of the NAIA National Tournament. At LSUS, Anglin worked primarily with the post players, including All-American Rakim Lubin and NAIA National Player-of-the-Year Jeff Garrett.

Anglin began his coaching career in 2011 under Louisiana Basketball Hall of Fame coach Tim Floyd at the University of Texas El Paso. At UTEP, he served as the assistant director of basketball operations and as video coordinator.

In 2016, Anglin returned to UTEP to serve as the director of scouting and player personnel. During his time at UTEP, Julian Washburn, Dominic Artis, and Omega Harris earned All-Conference USA selections.

Anglin moved on to the University of Louisiana Monroe in 2013 and served as an assistant coach under Keith Richard. Anglin spent three years at ULM, assisting the Warhawks to 44 victories in his final two seasons. ULM advanced to the College Basketball Invitational (CBI) in 2015, followed by a College Insider.com Tournament (CIT) bid in 2016.

ULM registered back-to-back seasons with 20-plus wins for the first time since 1991 and for only the third time in program history.

Anglin received his bachelor’s degree in history from LSUS in 2010 and a masters of exercise science from ULM in 2016. He is married to the former Susan Swearingen of Shreveport, and the couple have one child, Edith James, born in December of 2019.