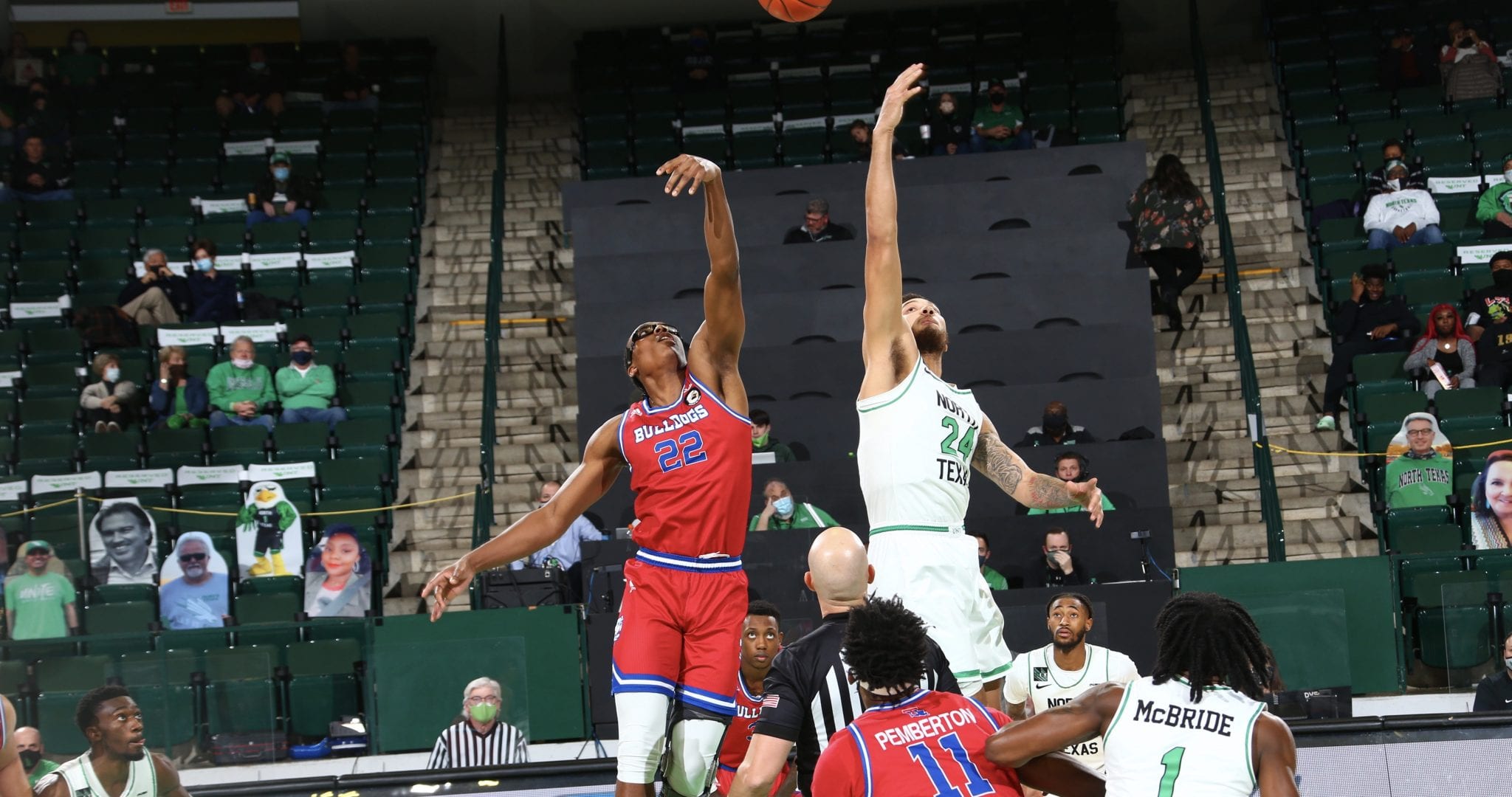 DENTON, Texas – Last season, it was DaQuan Bracey who took the game over in the second half to lead Louisiana Tech to a win over North Texas in the Super Pit.

On Friday night, Isaiah Crawford was the one who took over.

The sophomore forward scored a career-high 27 points, 18 of which came in the second half, to help Louisiana Tech edge North Texas by a final score of 68-63.

“I was so encouraged in the huddle, hearing the guys talk to one another and how important getting stops would be,” said head coach Eric Konkol.  “When we got a string of stops, we were able to get a good run up the court.  All of a sudden, we got a couple of baskets to get ourselves back into the game and build some momentum and keep it going.”

Crawford was part of a young Texas trio that showed out in front of friends and family in attendance.  From nearby Fort Worth, he made 12-of-15 field goals and all three of his three-point attempts.

Then there was the Dallas native Cobe Williams who overcame multiple injuries to register 11 points, four assists and zero turnovers.  Add to that his defense on the other team’s point guard, reigning C-USA Player of the Year Javion Hamlet, who had only seven points and three turnovers.

“You can see the difference Cobe Williams makes for us,” said Konkol.  “He had to take some time away in the first half with an ankle injury.  It changes us on both sides of the floor.  His defense on Hamlet tonight was just sensational.”

The third was Kenneth Lofton, Jr., the pride of Port Arthur, Texas.  The freshman outdueled UNT’s senior center Zachary Simmons, tallying 14 points and a game-high 10 rebounds for his fifth double-double.

Despite Williams’ long absence in the first half and the team making just one shot from beyond the arc and two makes at the foul line, the Bulldogs found themselves down just 32-29 at halftime.

Then it was Crawford time.

He scored 12 of the team’s next 16 points.  And he was unstoppable doing it, scoring at all three phases – couple of threes, mid-range jumpers, power layups inside paint.  His last bucket of that stretch allowed the Bulldogs to take a 60-59 advantage with 2:54 left.

“He was awesome,” said Konkol.  “From hitting threes to having some big plays around the basket with contact, he did a little bit of everything tonight.  He came up with some monster rebounds on the other end as well.  He is coming of age, hitting that rhythm as a sophomore now.”

After getting a couple more defensive stops, Lofton, Jr. grabbed his 10th board of the game and kicked it out to Amorie Archibald who drilled a dagger three from the wing to make it a four-point lead.

LA Tech would hold on late, handing North Texas its first home loss of the season (were 7-0).  The Bulldogs outscored the Mean Green, 24-10, in the final 10 minutes of the game.  They have now won seven of their last eight and four of their last five road games.

The two teams will go at it again on Saturday at 1 p.m. on Stadium.