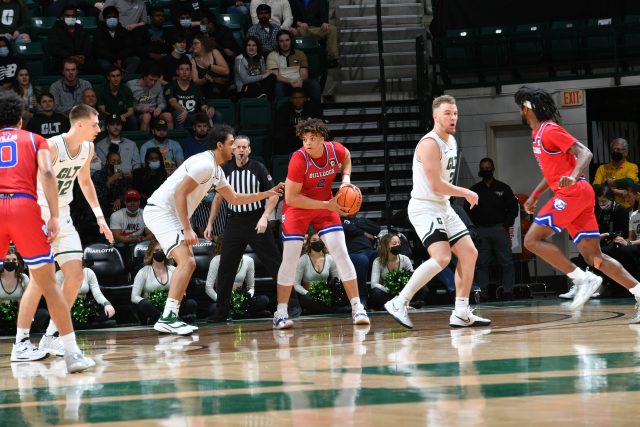 CHARLOTTE – Some key defensive stops and clutch free throws down the stretch helped Louisiana Tech pick up a road victory over Charlotte with a final score of 82-77 on Thursday night inside Halton Arena.

It was a total team effort with four Bulldogs scoring at least 14 points – Kenneth Lofton, Jr. (18), Keaston Willis (16), Cobe Williams (15) and Amorie Archibald (14).  The offense also took care of the basketball, committing a season-low five while forcing 17 on the 49ers.

Charlotte (13-10, 6-5 C-USA) opened up by making its first six field goals, but LA Tech settled in and held the 49ers to just six makes in their last 18 attempts of the first half.  As a result, the Bulldogs took their first lead at 31-30 when Archibald came up with a steal and went coast-to-coast for the layup.  It was a one-point lead at the midway point, up 33-32.

Three ties and a series of lead changes took place early in the second half.  Then it was a game of runs – 6-0 run here, 6-0 there.  LA Tech had a 57-56 advantage with 8:37 to go, but six straight points by Williams and a triple by Keaston gave the ‘Dogs their largest lead of the game at 66-56.

After a timeout by the 49ers, the home team countered with an 8-0 run to slice their deficit down to two.  LA Tech punched back with a 7-2 run of its own.  A couple of half-court stops and big free throws by Lofton, Williams and Willis helped secure the Bulldogs seventh road win.

“Charlotte was very challenging for us to defend.  I thought our guys did a nice job of settling in, getting some stops.  The turnover margin was really big for us tonight, having just five turnovers.  And then we knocked down our free throws at the line.  I thought tonight was another slice of how Junior is developing.  The amount of double teams he gets.  He gets so much attention.  I thought he and his teammates did a really nice job of finding one another.”

·        The Bulldogs eclipsed 80 points for the second straight game and the 11th time this season.

·        The Bulldogs committed only five turnovers, the fewest this season and the fewest since November of 2019.  They finished with a +12 turnover margin.

·        Kenneth Lofton, Jr. led the Bulldogs in scoring for the 10th time this season with 18 points.  He also dished out four assists (has had at least four assists in four straight games).

·        Keaston Willis scored 16 points, reaching double figures for the eighth straight game.  He sank three three-pointers in the process to give him 65 triples on the season.

LA Tech returns to the Thomas Assembly Center in a week to battle UTEP on Thursday, Feb. 17.  Tipoff is set for 6:30 p.m. and will be streamed live on ESPN+.