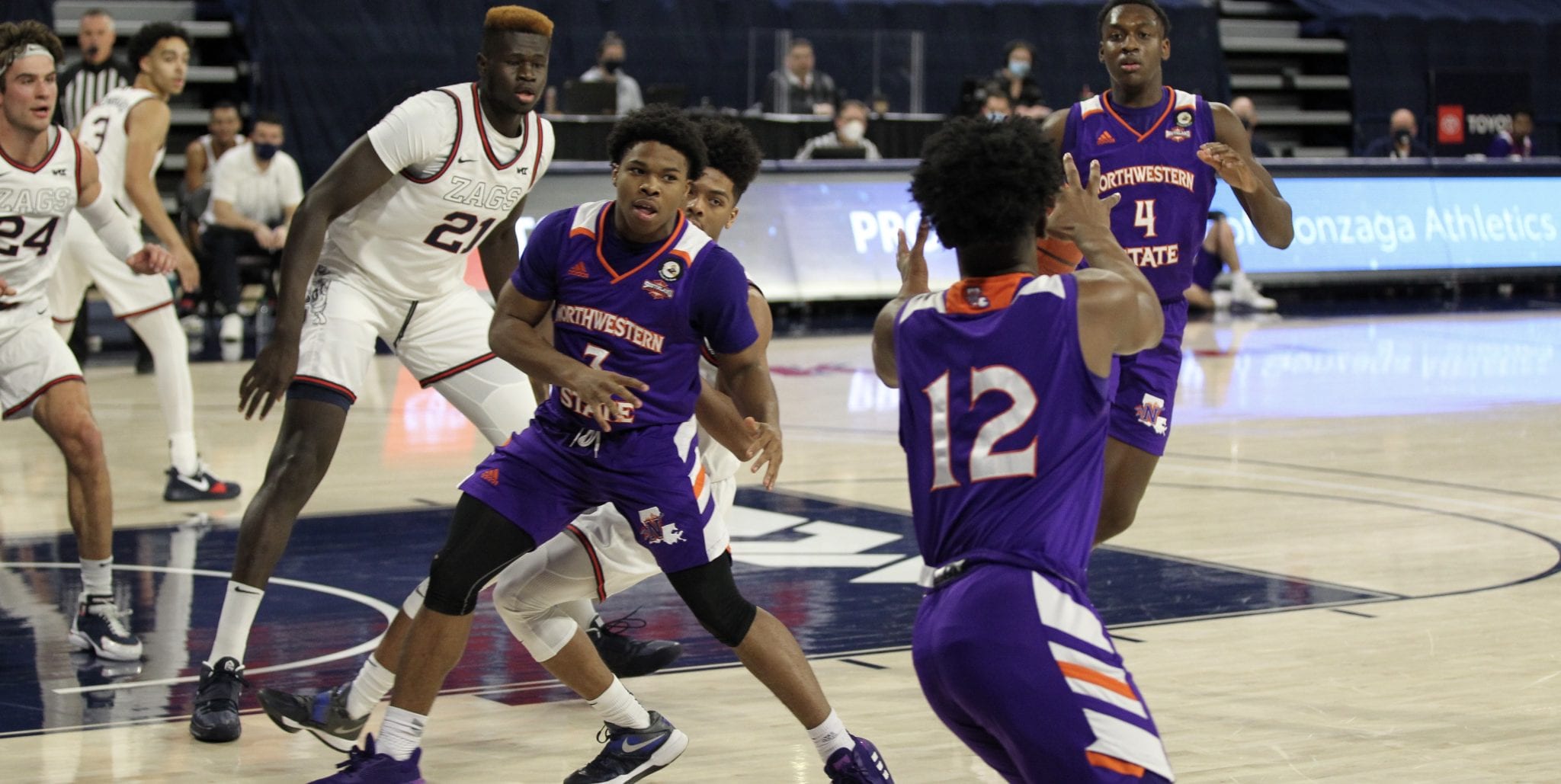 SPOKANE, Washington – A change in philosophy helped the Northwestern State men’s basketball team stand tall against the No. 1 team in college basketball for a half.

The Demons were within striking distance of top-ranked Gonzaga for the first 20 minutes before the Zags were able to turn the game to their preferred pace, cruising to a 95-57 victory inside the McCarthey Athletic Center.

Northwestern State (1-8) played at a more deliberate pace offensively than in their first eight games of the season, and it paid off for the first half.

After surviving a 14-2 Gonzaga run to start the game, the Demons pulled within five with 10:15 to play in the first half when Jovan Zelenbaba knocked down a short jumper.

The Demons shot just 35.3 percent from the field in the opening 20 minutes but kept the game relatively close by knocking down several timely 3-pointers and getting 10 first-half points from freshman guard Carvell Teasett.

Teasett finished with a team-best 16 points, marking his fourth straight game in double figures. While Jairus Roberson (12 points) was the only other Demon to reach double digits, McConathy saw plenty of contributions outside the scoring column.

Gonzaga, which entered the game with the No. 4 scoring offense in the country, cranked up its transition offense in the second half and finished with a 28-11 advantage in fast-break points while turning 20 Demon turnovers into 25 points.

Corey Kispert, who scored the first five points of the game, hit on 10 of 13 points, finishing with a game-high 27 points. Led by Kispert, the Zags shot 55 percent for the game, including 60.6 percent (20-for-33) in the second half.

Anton Watson (15), Jalen Suggs (12) and Drew Timme (12) joined Kispert in double figures for Gonzaga, which enjoyed a plus-24 advantage on the boards, including grabbing 18 offensive rebounds.

“They’re so efficient offensively,” McConathy said. “Every time they execute a play, there’s a guy lined up for a shot.”

The Demons slowed in the second half and finished 21-for-56 (37.5 percent) from the field. Roberson accounted for four of Northwestern State’s seven made 3-pointers.

“We’re not shooting the ball very well,” McConathy said. “That’s something I think will come when we get in the league. We’ve got to come back in here and compete and do a better job of working the clock.”

The Demons and Zags meet again Tuesday night at 8 p.m. Central before Northwestern State concludes its stretch of three games in as many days with a matchup at Washington State on Wednesday.

“It was a great effort,” McConathy said. “They’re really, really good. It was a great opportunity to play against the No. 1 team in the nation, and we get to do it again tomorrow.”