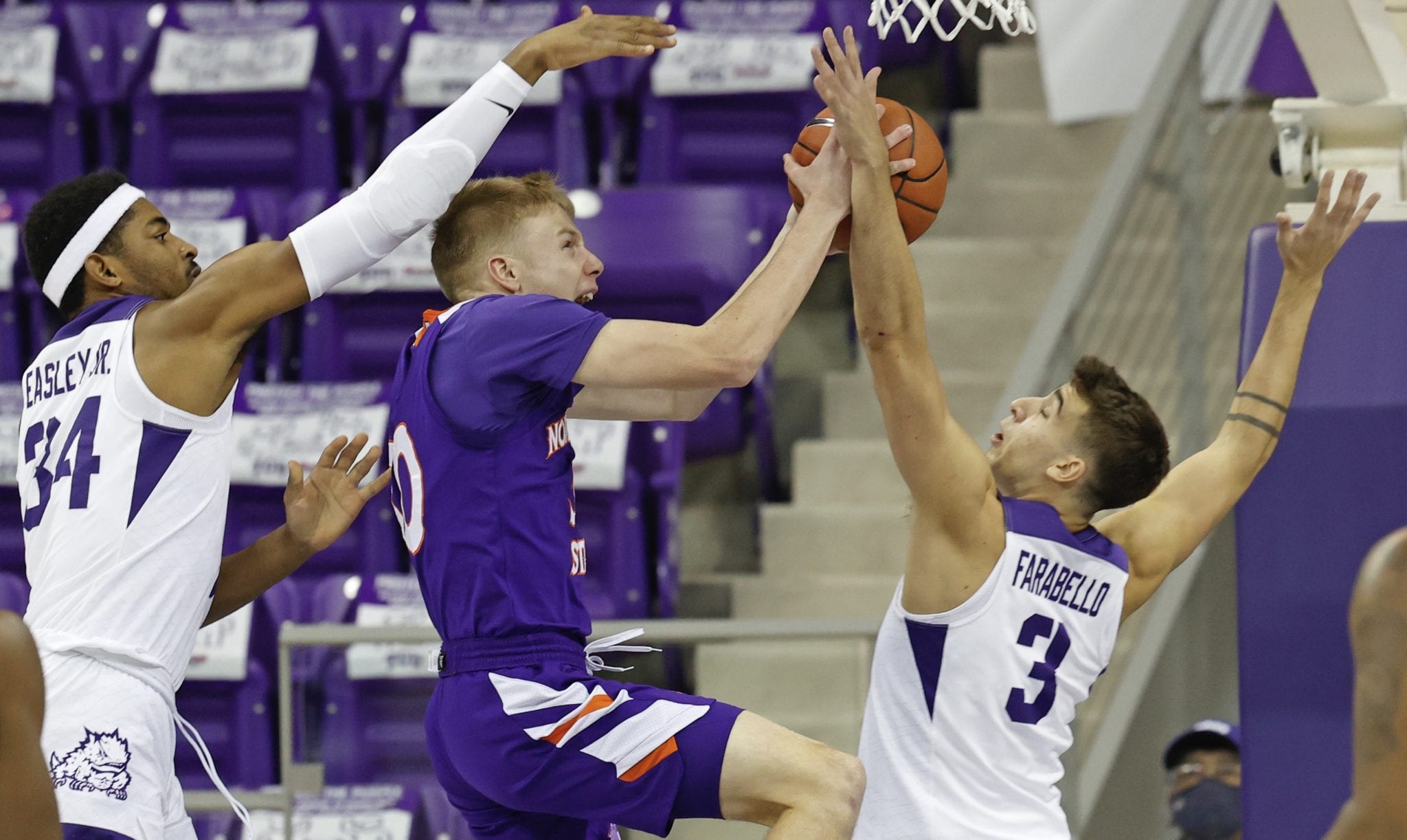 FORT WORTH, Texas – There was nothing lacking with the Northwestern State men’s basketball team’s competitiveness Thursday night in Schollmaier Arena.

The Demons (0-4) stood toe-to-toe with one of the nation’s top defensive units before succumbing to a seven-minute, second-half scoring lull that allowed TCU to wrest control in a 74-68 Horned Frogs victory.

“We competed, and that was such a big deal for us – to be able to compete and step it up,” said coach Mike McConathy, whose team finished on a 12-4 run over the final 3:34. “We’re still not as aggressive as we need to be, but we’ve got to work to get there. We took some big steps and jumped up there and got after it.”

Despite trailing by 14 with 3:34 to play, the Demons pulled within six with 8.6 seconds to go, using their defense to fuel the finishing kick.

Northwestern State collected a season-best 10 steals, marking the second time in five games they reached double figures in that category dating to the 2019-20 season.

“John (Norvel), Carvell (Teasett) and Trenton (Massner) did an unbelievable job defensively, getting their hands on balls and giving us extra possessions,” McConathy said. “Jovan Zelenbaba won’t show up on the stat sheet, but he played aggressively and gave us speed on the court.”

With the exception of TCU’s mid-second half run, the Demons had an answer for every punch the Horned Frogs threw.

Trailing by six at halftime, the Demons opened the second half on an 9-2 run that started another round of back-and-forth momentum swings between the teams.

NSU used a 6-0 run, capped by a Zelenbaba fast-break layup, to pull within two before TCU began to find its stride offensively.

“It was a great effort by our guys,” McConathy said. “I’m tickled to death they didn’t get down when TCU went on that 19-4 run. We had enough within us to mount a comeback.”

Massner sparked the Demons early, scoring 15 of his team-high 21 points in the first half. The junior guard sank six of nine shots from the field in the first 20 minutes, helping NSU start 14-for-28 from the field before enduring an 0-for-7 end to the half.

However, the Demon defense held up its end of the bargain, limiting TCU to just three points in that same 3:37 stretch to keep NSU within striking distance at the half.

Freshman Kendal Coleman was the only other Demon to reach double figures, notching a career-high 15 points for the first double-digit scoring output of his career.

The Demons return to action Sunday when they host ULM in the home opener at Prather Coliseum. Tipoff is set for 2 p.m.