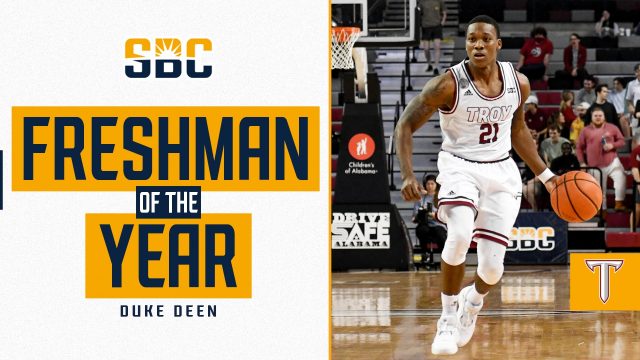 The Troy University guard averaged nine points, 2.3 rebounds and 3.1 assists on 34.4 percent shooting from behind the arc.

“Cody Deen is the ultimate competitor,” Troy Head Coach Scott Cross said in a press release. “We needed a big-time shooter, & we believed that he was the best available 3-PT shooter in the country coming out of Panola College last season.

“Cody has fought through injuries all year long to make himself available to help us win basketball games. Cody has done an amazing job running our team this season & is one of the best shooters in the league.

“Opposing teams cannot afford to sag off him at all, or he will make them pay. Cody works extremely hard in practice, never takes a day off, & puts the time in after practice to be the best version of himself. We know that we wouldn’t have had the success that we have had this season without him!”

Starting 25-of-28 games played this season, Deen becomes the second player in program history to win the award – Wesley Person (2014-15).

He finished the regular season ranked 11th in the Sun Belt in assists per game, eighth in assist/turnover ratio (1.7) and eighth in 3-pointers made per game (1.9).

Troy (19-10) finished fourth in the Sun Belt at 10-6. The Trojans play the winner of the Little Rock-South Alabama game at 2 p.m. Saturday in the Sun Belt Conference Tournament.

Deen began his college career at Panola College, averaging a team-best 20 points in the 2020-21 season. He also averaged 4.9 assists and 3.1 rebounds.

He shot 41.6 percent on 3-pointers and 86 percent from the free throw line for the season.

He hit at least four 3-pointers in nine games.

Deen led Bossier to the Class 3A state championship in the 2019-20 season. He was named the MVP on The Press-Tribune’s All-Parish team.