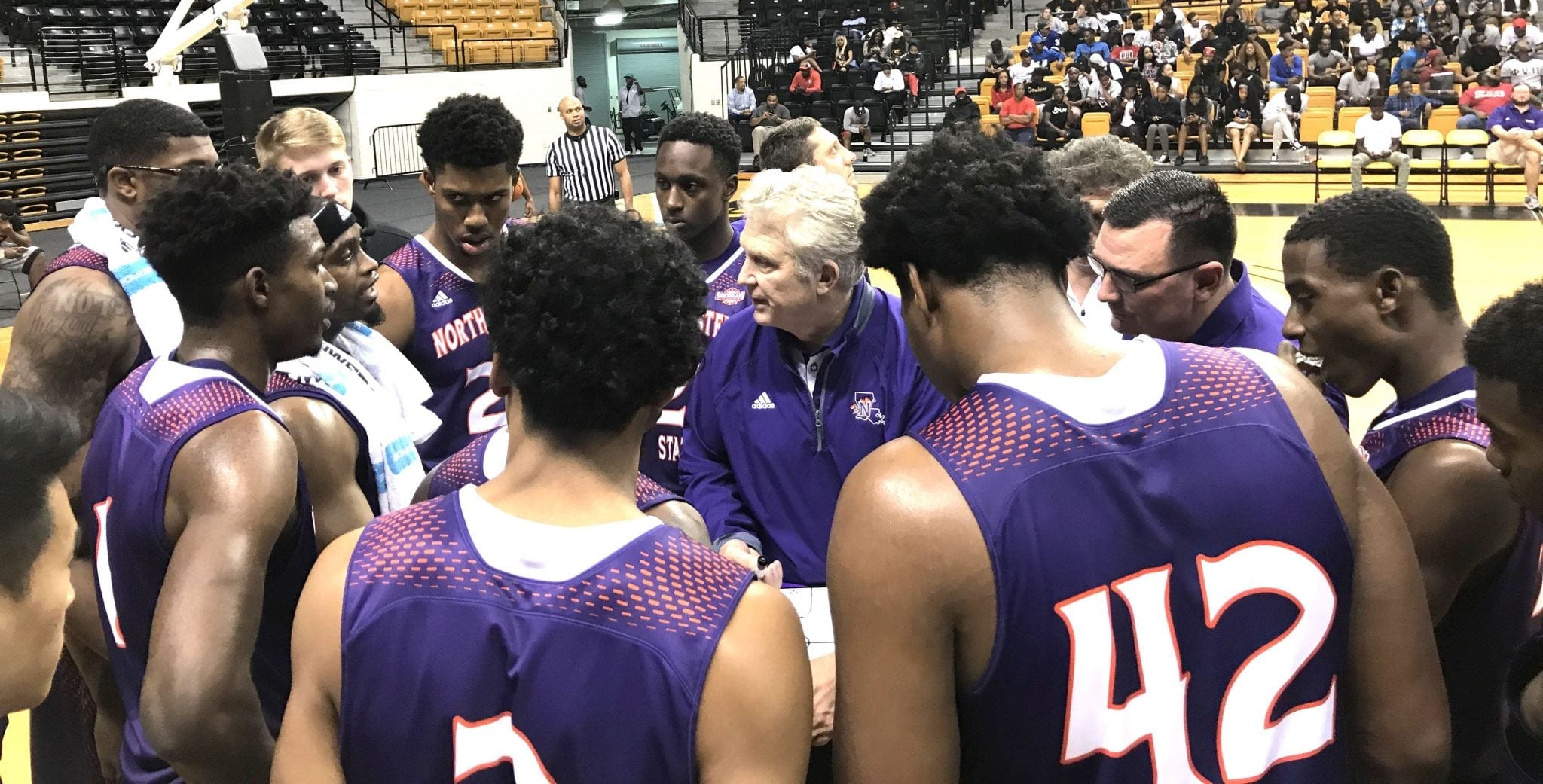 GRAMBLING – The Mike McConathy wave system appears to have resurfaced if Monday’s exhibition at Grambling is any indication.

All eleven Demons that played scored as Northwestern State pulled away for a 92-85 win in a game benefitting Hurricane Harvey recovery through the American Red Cross.

Senior Jalan West, a former Bossier High star who is in his seventh year of eligibility after missing all but one game of the previous two seasons with a pair of ACL tears, scored a team-high 20 points.

But it was three of his six assists that spurred the comeback late in the second half.

“It felt good to see my family and friends in the crowd and to be back on the floor with old teammates like Ishmael and Devonte and then the new guys as well,” said West, who added seven of his nine made free throws in the second half (9-for-9 overall). “I trust Coach Mike to put me in positions to be successful.

“I’m glad we got the win for all the Bossier people in the crowd tonight.”

Trailing by five, West assisted on consecutive three-point plays to sophomore Brandon Hutton and junior Ishmael Lane as part of a 13-2 run to lead 80-74 with six minutes remaining.

Grambling regained its composure to lead 84-83 with 3:21 remaining, but NSU senior Devonte Hall, another former Bossier star, delivered the dagger with a 3-pointer on West wraparound assist from the baseline, handing the Demons an 88-84 edge with two minutes left.

Despite shooting 52 percent from the field, Grambling didn’t make a field goal for the last 3:21. NSU sunk eight of its 10 free-throw attempts in that time frame to create separation.

“We’ve got eight newborn horses trying to find their way,” said NSU coach Mike McConathy, who credited the quote to his son and former Demon Logan McConathy. “Grambling took a five-point lead, and we came back, had good stops defensively, got the ball inside to Brandon Hutton and Ishmael Lane.

“Grambling is really talented … and I was really proud that when we needed to get rebounds, we got them. I thought it was a great coming out for Jalan, and we’re gradually bringing him along. He’s taking small steps to get back to where he was, and we don’t want him to come back too quick.”

West started the game as a shooting guard, hitting 3-of-4 from 3-point range in the first half as the Demons made 7-of-13 from distance. NSU finished just 8-of-20 from 3-point range, but Hall’s 3-pointer was part of his 15 points and six rebounds.

“It feels really good to start the season off on the right foot, and great teams have to find ways to win battles in the last five minutes,” Hall said. “If we can continue to build on this, we’ll be fine.

“It was great to be back (with Jalan). Shoutout to Grambling fans, they were loud tonight and kept me energetic.”

In front of a crowd that ballooned to at least 2,500, NSU started with a trio of 3-pointers to aid in a 13-4 early lead. West, Hall and freshman Czar Perry made early triples before freshman Caleb Starks added a three-point play for a 16-7 edge.

Both Grambling and NSU played up-tempo, slowed only by 56 combined fouls.

Admission to the game was free, but Grambling officials were collecting donations to send to the Hurricane Harvey relief effort.

NSU starts its regular season Friday at Texas at 7 p.m. before returning for its home opener Sunday against LeTourneau (4 p.m.).