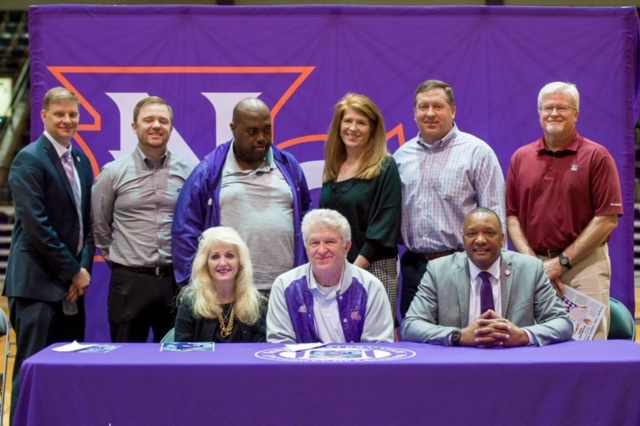 NATCHITOCHES – True to himself to the end, longtime Northwestern State men’s basketball coach Mike McConathy made a day that was supposed to be about him into one that was about celebrating others.

McConathy held court one last time on a piece of hardwood that soon will bear his name, concluding his 23-year run as the Demons’ head coach in a way that only he could – by focusing on nearly everyone else except himself.

“The most important thing is all of y’all – all of you people who have supported us over the years,” McConathy told a group of a couple hundred supporters and co-workers Tuesday morning inside Prather Coliseum. “I’m not going to get into names, because I’ll get in trouble. You supported us over the years. The school, whether it was CAPA, the fraternal organizations, cheerleaders, dance line, my band – well not my band, but I’m going to call them my band today. I love them to death. Larry (Owens) took them away from me this year, well the last five years.

“I am truly blessed to have all of y’all in my life. The impact you have made on me is far greater than anything I did to you.”

Through 23 years and 330 of his Louisiana college basketball-record 682 career victories, McConathy has been the constant at Northwestern State, extending the legacy of one of the university’s most venerated athletic families.

McConathy spent more than two decades as the head coach of the program where his father became a first-round NBA Draft pick and where his two uncles played. He coached both his sons as they wore NSU’s Purple and White.

He added to Northwestern State’s basketball lineage, capturing three Southland Conference Tournament championships and pushing the Demons to three NCAA Tournaments, collecting two wins in the process, including the 2006 first-round buzzer-beating victory against No. 3 seed Iowa.

McConathy’s legacy did not stop on the sidelines or the end lines of a court. Wins were important to him, but winning continued away from the game.

“He was more concerned with winning hearts than winning on the hardcourt,” said his wife, Connie, who was on the stage with McConathy’s brothers, Pat and Bill, his sister, Melinda, and his son, Logan, as well as NSU’s legendary Harris Wilson Jr., better known as “Coach Black.”

One look around the Prather Coliseum stands emphasized Connie McConathy’s statement and reiterated what McConathy had missed the past two seasons.

In addition to McConathy’s co-workers and friends were a pair of coaches whose teams have faced the Demons numerous times across the years in Stephen F. Austin’s Kyle Keller and Louisiana Christian’s Reni Mason. McConathy was able to greet each and share a few moments with two of his coaching colleagues and friends, something COVID-19 restrictions took away from him the past couple of seasons.

For all McConathy appreciated about the game he gave 39 professional years to – 16 at Bossier Parish Community College before arriving in Natchitoches – it was what COVID took away that struck him hardest.

“The toughest thing for me with COVID was not having the ability to go up in the stands and touch the people who gave me the opportunity for success,” said the coach who routinely spent his pregame time shaking hands and conversing with fans in the stands. “That’s where I’ve always felt my heart was. It was with the people in this town, this community. (Former Lady Demon head coach) James Smith told me something a long time ago. He said if you get invested in this community – first with the church, that’s the main thing – and you get out and see people, you will be here a long time. Coach Smith was a wise man.”

McConathy also thanked Northwestern State for allowing him to “be who I am in my faith, not hide behind a rock.”

After a standing ovation that would have triggered an NBA shot-clock violation – it went for 24 seconds – McConathy thanked his former staff members, current players and coaching staff before turning to a story that encapsulated one of the “whys” he remained in the game for nearly four decades as a coach, fighting back tears as he told it.

“I couldn’t have done this without players,” he said. “We’ve been blessed to have not only great players but great young men who wanted to try to do it the right way. I’ll tell you a quick story about Devon Baker. Devon Baker was from New York City. Devon Baker fought me every day, fought me EVERY day. He wrote me something yesterday, and he said, ‘Coach, I didn’t understand then, but I do now.’ That’s a testament to my staff and what we believe in.”

For 23 years, McConathy was able to instill those lessons into a generations of Northwestern State basketball players.

When the next group of Demons takes the floor, they will do on a piece of hardwood emblazoned with the name of Louisiana’s all-time leader in college basketball coaching victories.

“You are genuinely one of the nice guys in our business,” NSU Director of Athletics Kevin Bostian said. “Today is a day to celebrate you and your family. Coach, your legacy will live on forever at Northwestern State. From this point on, our court will be called Mike McConathy Court at Prather Coliseum.”