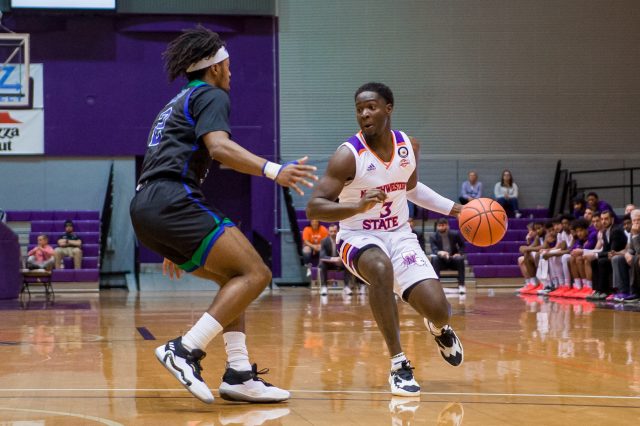 Northwestern State tied a school record for 3-pointers with 17 as the Demons pulled away late from Houston Baptist in a 97-87 win.

NSU (7-16, 3-3 Southland Conference) won its first true road game of the season by shooting 17-26 (65 percent) from 3-point range and 61 percent overall from the field. HBU shot better than 60 percent for most of the game but finished 55 percent.

“I don’t remember a team shooting like we did tonight, and I know as a shooter that I would have loved to taken the shots that we took tonight,” said NSU coach Mike McConathy. “We got great minutes from so many, and our depth really showed, and I think it wore HBU down late.

“Our second unit came out with spacing, ran the floor and made shots. To shoot 65 percent from 3-point range and 61 percent overall, that’s incredible. I only counted three bad shots in all of those shots.”

Six different Demons made a 3-pointer with five making multiple as NSU started the game 9-10 from deep.

Reed and Teasett loomed large in the late run as they combined for 13 of those 18 points.

“Magical. This team will be in the history books forever,” said Reed of NSU’s record-tying performance. “It’s a testament to us being ourselves and moving the ball.

“We are a good-shooting team. Coach McConathy preaches that it doesn’t matter who starts, you just have to be ready to play when you come in. We made the most of our minutes tonight.”

NSU’s original 3-point record came in 1993 against UTSA when the Demons made 17-34. The 2022 squad needed eight fewer attempts.

A pair of Reed free throws (7-8 overall) handed NSU the lead for good after a period in which the lead changed hands seven times in the second half.

Teasett scored seven straight points in the run and eventually found an open Garrett, whose 3-pointer nailed the win shut at 92-79.

Reed scored a season-high 21 points, 18 in the second half, to lead four Demons in double figures.

Teasett added 20 points, which is the first game this season in which NSU had multiple 20-point scorers.

Garrett chipped in 13 and Kendal Coleman had 12 points and 13 rebounds, his 10th double double in the last 13 games.

HBU’s Darius Lee dropped 30 points on NSU for the second time in his career, but the Demons silenced him late when the Huskies needed points.

Thursday’s matchup pitted NSU’s bench (54 points) against HBU’s starters (80 points). The Demons held a 54-7 edge in bench points, and the bench bailed out the Demons after poor starts to both halves.

After trailing by double digits in the opening minutes, NSU launched an all-out offensive from the perimeter to build a 48-43 halftime lead.

The Demons’ second unit authored that comeback with a pair of 3-pointers from McDonald and single treys from Jovan Zelenbaba and Reed, the latter of which tied the scored just under 10 minutes left in the first half.

The bench scored 24 of NSU’s first 33 points anchored by eight from Zelenbaba and seven from Cedric Garrett.

The starters returned and stretched the lead to as many as seven points.

The 48 first-half points was the most NSU has scored this season against a Division I opponent.

HBU started on a 19-7 run by making 7-9 from the field and forcing three NSU turnovers.

The Huskies turned 15 NSU turnovers into 25 points, but a late defensive surge allowed NSU to score 22 points off 15 HBU mistakes.

The Huskies’ Zach Iyeyemi scored eight of his 13 first-half points in the early run. He finished with 15 points and was joined by Sam Hofman (14 points), Jade Tse (11) and Brycen Long (10) in double digits.

But a Reed 3-pointer sparked a 12-2 NSU run in which Reed scored seven points and vaulted NSU back into the game.