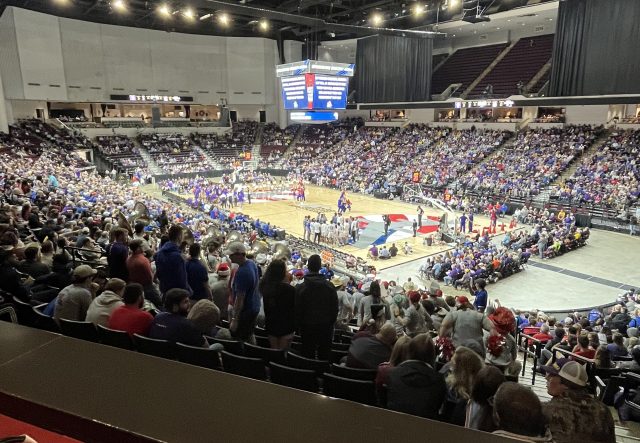 The LSU Tigers overcame a slow start with a dominating finish to defeat Louisiana Tech 66-57 Saturday night before a large crowd at Brookshire Grocery Arena.

LSU Head Coach Will Wade was impressed with the turnout and energy of the crowd.

“Tremendous atmosphere, La Tech is a tremendous ballclub,” Wade said in his postgame press conference. “The fans looked evenly split. Maybe we had a few more, but it was a great atmosphere.

“It was good for basketball in this state that we come up here and 6,500 people to watch two teams play on a neutral court. I thought it was a great afternoon of basketball and excited to get a win.”

That was the start of a 9-0 run to end the game. LSU actually outscored Tech 15-2 over the game’s final seven minutes.

“Tari was phenomenal,” Wade said. “He a great job,” Wade said. “That 3 hit every part of the rim. He just took over and that dunk at the end. He had (Kenneth) Lofton (Jr.) him and he had four fouls and didn’t want to foul. Tari had to take advantage of that mismatch and he did.”

LSU’s Darius Days was dominant on the boards, bringing down a career-high 18 rebounds. He also scored 13 points.

Lofton and Amorie Archibald led the Bulldogs with 13 points each.

Lofton picked up his fourth with 9:49 left on a drive to the basket by Pinson.

“The turnover battle was the thing we were trying to manage the most,” Tech Head Coach Eric Konkol said. “In the second half, foul trouble and trying to manage minutes on our end, became tough.

“I asked our guys to empty the tank and they absolutely did that.  No moral victories here. We wanted to win this ball game. I thought our guys did so much to give us a shot. Just needed to manufacture a few more buckets.”

The Bulldogs got off to a tremendous start, scoring the game’s first 11 points. Christon and Archibald hit 3-pointers during the stretch.

“It just takes us a moment to get our footing,” Wade said.

“We’re a lot better in the second half when (the coaches) can control things better with our offense in front of us.”

LSU led by as many as five, but Tech tied it at 48 and the game stayed close until the Tigers’ late run.