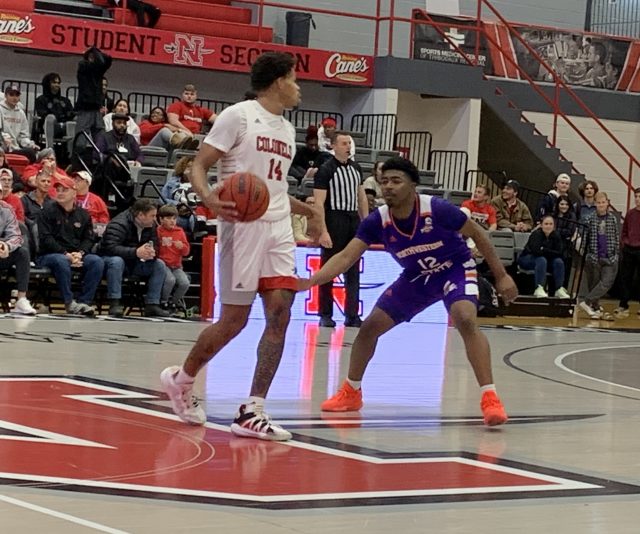 THIBODAUX – Northwestern State clawed its way back into the second half at Nicholls, but the Colonels’ late surge kept the Demons out of the Southland Conference win column Thursday in a 69-58 loss.

NSU tied the game at 52 under 10 minutes remaining, but the Colonels ended the game on a 17-6 run.

“We need to figure it out because we are a lot better than we’ve showed,” said NSU coach Mike McConathy. “We’re still fighting to find our identity, and we just haven’t been able to get over the hump of a difficult non-conference schedule.

“Nicholls turned us over and got some easy baskets.”

NSU finishes the road trip Saturday at New Orleans in a 4 p.m. tip. Dating back to the Privateers’ win against NSU in the finale of the SLC Tournament Tip-Off event, UNO has won three straight and is 2-0 in league play.

Jalen White made one of his three 3-pointers to break the 52-52 tie, one of five Colonels to score in the run.

One of White’s 3-pointers early in the second half handed Nicholls a nine-point lead as the Colonels threatened to blow the game open, but NSU freshman Carvell Teasett scored eight straight NSU points and closed the lead to as few as four points (47-43).

Cedric Garrett scored seven of his nine points in the second half (4-6 shooting), including two straight buckets that tied game at 52-52.

Larry Owens chipped in 11 points and five rebounds on 5-9 shooting.

The Colonels didn’t scorch the nets (41 percent shooting), but they generated seven additional shots and five more free throws thanks to the turnover disparity (18-8).

Nicholls was playing without leading scorer Ty Gordon, who missed the game with an injury.

The Demons weathered an enormous first-half drought and a 15-0 Nicholls run, and NSU needed a shot in the arm trailing by 12 points late in the first half.

NSU found that jolt in the form of an 8-0 run to end the half and cut the Colonels lead to 28-24 at the break.

“We battled and we battled,” McConathy said. “(White’s) 3-pointer was a huge shot for them, and we struggled to keep them off the offensive glass in the second half.

“We fought back a lot tonight, but we didn’t have enough at the end.”

Teasett canned a 3-pointer at the buzzer to cap the run Kendal Coleman scored all three of his points during the run as both teams struggled offensively.

Reed (eight points) made a driving layup to put NSU up 16-13 before the Demons didn’t score again for 8:08.