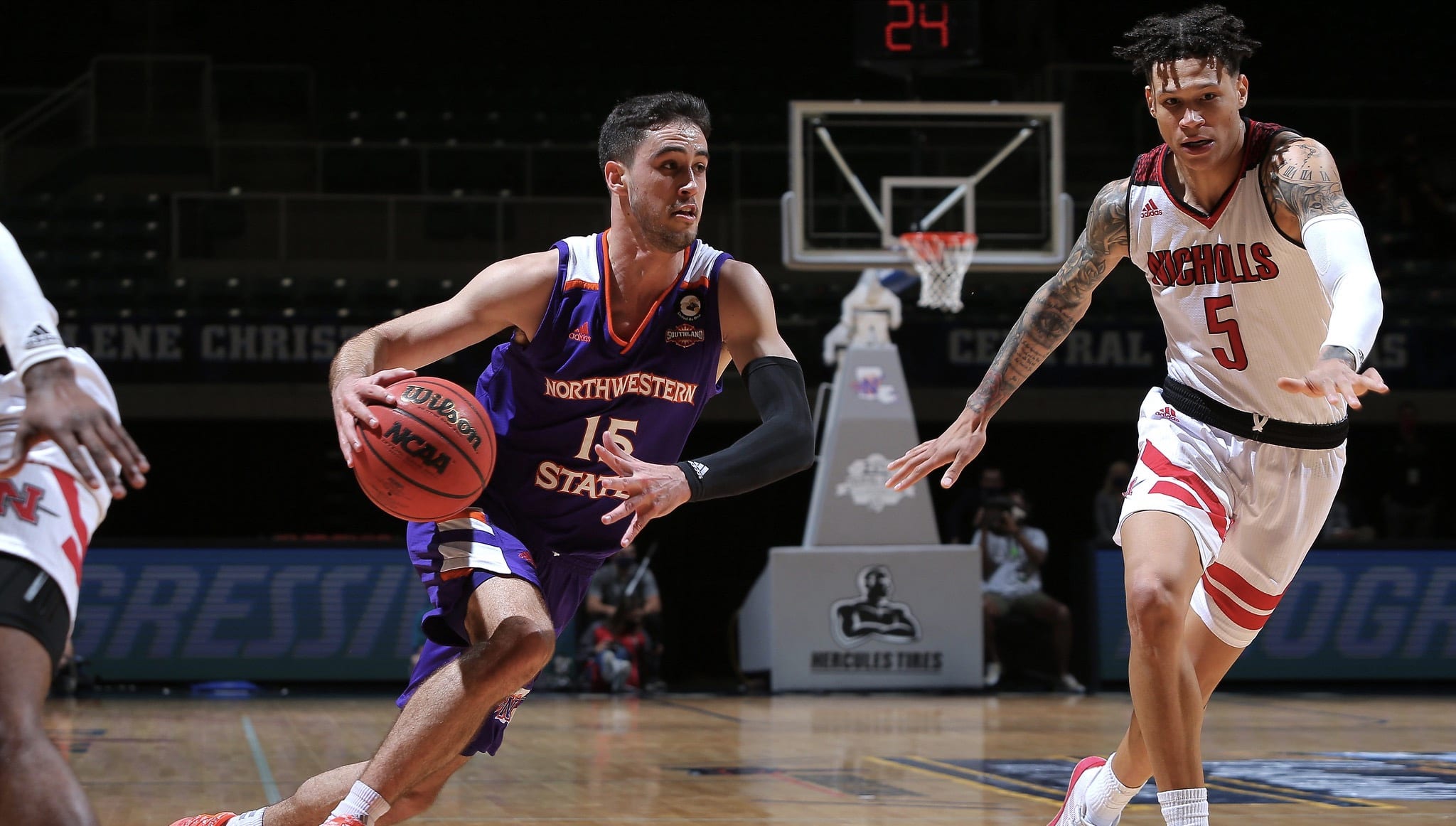 However, the Demons may have made their run just a little too early.

After erasing a 13-point, first-half deficit and turning it into a five-point, second-half lead, Northwestern State could not hold off the fast-closing, top-seeded Colonels, falling 88-76 at the Merrell Center.

“I’m really proud of our guys and how they came out and played against our league champion,” said 22nd-year head coach Mike McConathy, who coached his 29th conference tournament game. “We battled — got down early and came back to take a five-point lead. (Nicholls) responded with a 3-pointer from Ty Gordon. I would say our effort was excellent. I would say we did a nice job in every area of the game. We just didn’t make our shots down the stretch.”

The Colonels (18-6), however, responded with five points in 2:02, starting with Gordon’s 3-pointer at the 9:34 mark – his first field goal of the game. Gordon then tied the game with a fast-break layup 33 seconds later. Those two buckets were Gordon, the Southland Conference Newcomer of the Year, made all night.

“Ty Gordon was a guy, if you go through the whole year, every time they need a big play or a big shot, he was able to do it,” McConathy said.

Gordon’s shot undid a 19-5 Demon run that spanned almost five and a half minutes. Zelenbaba, who finished with a career-high 20 points, sparked five points, two assists and a steal in that time.

His long outlet pass set up Trenton Massner’s one-handed dunk that gave the Demons a 58-57 lead, their first since CJ Jones’ jumper on the first possession of the game.

“We gave whatever we had,” said Zelenbaba, who became the sixth different Demon to score 20 points in a game this year. “They kept coming at us. They had some good transition offense, and we couldn’t stop them in the final three minutes.”

After Zelenbaba’s layup tied the game at 67 with 6:57 to play, the Colonels took advantage of their superior size, fashioning an 8-0 run on four consecutive buckets in the paint. Ryghe Lyons, who finished with 18 points, had the final six in the spurt.

“They are a difficult matchup for us,” McConathy said. “We got so small, (Lyons) really hurt us inside. Ryghe kept slipping behind us. As big as he is, you wouldn’t think he would slip behind anybody and hide, but he hid. Their interior passing was exceptional, and they did a good job scoring those buckets.”

Led by Lyons and Najee Garvin (14 points), the Colonels outscored the Demons in the paint, 48-26, as the NSU bigs fought foul trouble throughout.

Despite falling down by 11 late, Northwestern State tried to mount one last charge as Jamaure Gregg knocked down his first 3-pointer since Nov. 29 to trim the lead to eight. Nicholls closed the game by sinking their final four free throws to advance to Saturday’s title game.

“That’s a great team over there,” said LaTerrance Reed, who added 11 points. “Kevin Johnson (23 points) had a great night. Ryghe Lyons had a good night, but we’re a good team, too. We proved it all year.

“We fought to the end. There’s no laydown factor with us. We’re resilient. Everyone in that locker room is resilient, one through 15.”

In addition to Zelenbaba and Reed, Massner and Gregg finished with 10 points each.