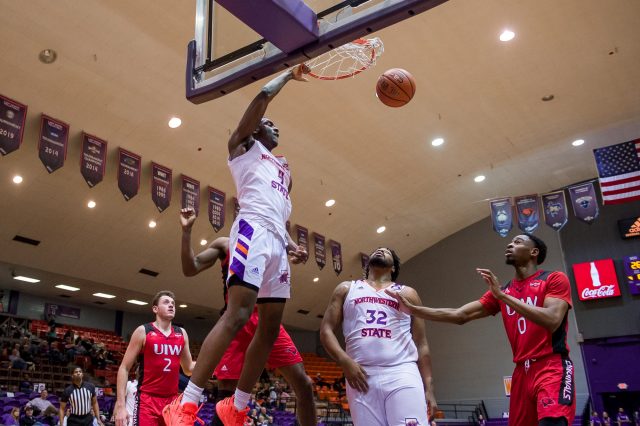 NATCHITOCHES – Northwestern State had been knocking on the door in Southland Conference play, not making enough plays in the final minutes to secure a win in its first three road games.

But on Thursday, the Demons busted that door down in a 79-70 win against Incarnate Word as NSU pieced together a 27-9 run in the final nine minutes at Prather Coliseum.

“We did an exceptional job of shooting, and we took good shots,” said NSU coach Mike McConathy as the Demons shot 57 percent from the floor and 75 percent in the second half. “We got the ball inside the Kendal Coleman, and we had guys like Robert Chougkaz pick and pop for two 3-pointers.

“We had 16 assists and made a lot of plays, and that’s real positive thing. Those breaks are what fueled us to get ourselves to win a ball game against a very disciplined team.”

Coleman supplied a couple of raucous roars with a dunk and three-point play during the run to highlight a career-high 25 points with 13 rebounds. It’s the ninth double double in the last 11 games and 10th overall.

But smashing UIW’s surge took an entire team of Demons – like Cedric Garrett’s five points to start the monumental run as part of his 14.

Junior Robert Chougkaz drained consecutive 3-pointers that handed the lead back to NSU on two separate occasions, including a trey with six minutes to go to put the Demons ahead for good (67-65). NSU made 10-of-18 from deep overall, it’s most efficient performance from range this season.

Natchitoches native Brian White was a fan favorite, and his stepback jumper padded NSU’s lead to 69-65 before sealing the win with a steal and an assist to Coleman. White added a game-high six assists.

“We haven’t played here in 40 days, and it was really nice to see the fan support, and I know they’ll be back Saturday (against Texas A&M Corpus Christi),” Coleman said. “We did start conference play 0-3, but it’s been really important to come together as one, to pick each other up when we make mistakes and to keep that negativity out.

“My teammates always tell me to keep shooting when I wasn’t making shots, and they fed me the ball all night and gave me open looks. I got a couple dunks, and these are the boys I want to ride it out with.”

Coleman shot 11-15 overall, and NSU’s 57 percent shooting as a team is a season-high.

Joining Coleman and Garrett in double figures was White (10 points) and Carvell Teasett, who made 4-of-7 3-pointers as part of his 14 points.

“We stuck together as a team, listening to the coaches and moved the ball inside, so I want to applaud the bigs and the coaches tonight,” Teasett said. “It felt amazing to feel the fan support tonight, and they boosted us to get the win.

“This one can be very big because we can take this momentum through the rest of conference play.”

In a game between the two winless teams in league play, NSU will try to use that momentum Saturday against a Texas A&M-Corpus Christi squad that beat Southeastern by 15 points on the road Thursday.

The Demons would love another quick start like Thursday night as NSU started on a 10-1 run with 3-pointers from White and Teasett.

The Demons, who never trailed in the first half and didn’t until the 16-minute mark of the second half, kept their lead by holding UIW to 32 percent shooting. But the Cardinals stayed close by making 7-9 free throws while NSU didn’t attempt any.

Coleman nearly had a double double in the first half with eight points and nine rebounds, highlighting NSU’s paint dominance with a 16-6 edge. NSU finished with a 36-22 advantage in the paint and cashed in 18 points off 13 UIW turnovers.

The Demons also committed 13 turnovers, but they led to just seven UIW points.

The Cardinals chopped up NSU’s four-point halftime lead by starting 10-14 from the field in the second half. NSU made six of its first seven shots but were plagued with turnovers early.