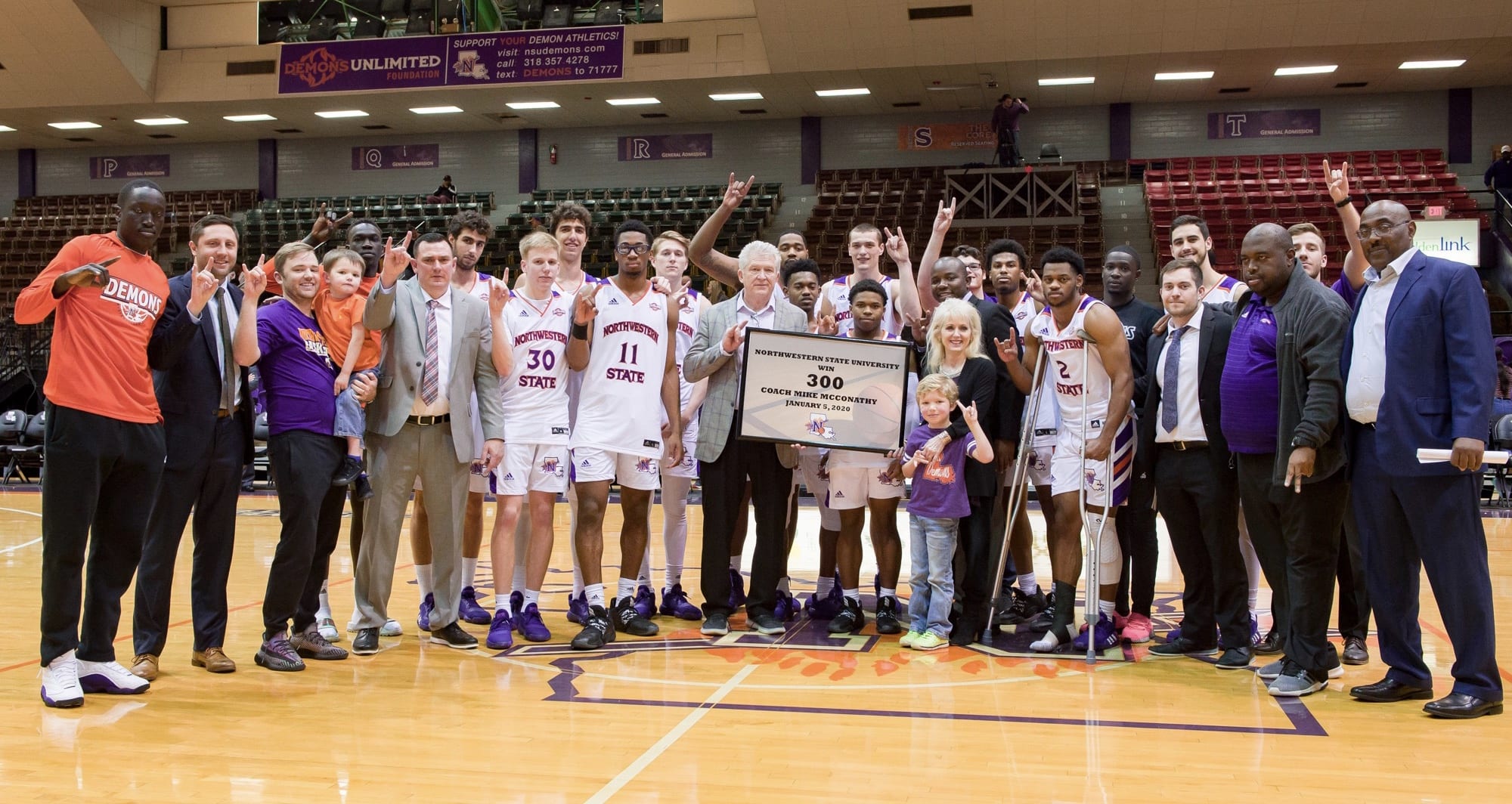 NATCHITOCHES – Five Northwestern State scorers reached double figures as the Demons topped the 100-point mark in Southland Conference for the first time in five years Sunday in a 106-79 win against Houston Baptist.

“It was awesome – 60 percent from the floor, and I hope we have some left for Wednesday night (at Incarnate Word),” said NSU coach Mike McConathy, who was honored at half court postgame for his 300th win as a Demon in his 21st season. “I thought the guys did a great job of moving the ball and attacking.

“Great effort on our kids’ part of competing and finishing the game.”

Four Demons set or tied career highs in points with sophomore Trenton Massner leading the way with 20 points. He shot 6-of-9 from the floor with two 3-pointers and six rebounds.

Massner set his career-high in points for the second straight game after scoring 10 points at Texas A&M-Corpus Christi on Thursday.

“We’re getting out in transition, and that’s when our offense is best,” Massner said. “We also moved the ball way better in the half court instead of trying just to take people 1-on-1, and that’s what the best teams do.

“We got better looks, and it makes your shooters more confident. (Roberson) started to make shots, then I hit some shots and (Jovan Zelenbaba) shot well, so it was a team effort and a good night.”

Roberson scored 11 of his career-high 19 points in a pivotal first-half run in which NSU built a lead that Houston Baptist (1-11, 1-2 SLC) never threatened.

Trailing 9-8, NSU pieced together a 19-5 run with two of Roberson’s three 3-pointers and five free throws.

NSU led 27-14 with nine minutes remaining in the first half, and the Huskies never got closer than 11 points early in the second half.

“We finally got rolling, and it’s nice to see teammates make the shots they are certainly capable of making,” Gregg said. “I had a bad couple of games since coming back from my injury (concussion), and the coaches kept talking to me, slowing me down and encouraging me to be more aggressive.

“We stuck together after the technical fouls and our two guys (Gatdoar Kueth and Chudier Bile) getting ejected, and we bonded and said we had to do it for them.”

The Demons got plenty of help off the bench besides Roberson.

Zelenbaba made both of his 3-pointers in the second half to keep Demons’ offense on track.

“Jamaure Gregg played with purpose and passion,” McConathy said. “The play of Jones and Norvel was extremely critical along with Zelenbaba.

“Zelenbaba fouled out for the second straight game, but I’d rather him be aggressive and foul out than not be aggressive. Massner knows the game so well, and he’s sneaky athletic. He makes an impact whether he’s getting stats or not.”

NSU’s 10 3-pointers tied for the second highest this season (11 vs. Centenary).

After the game, McConathy was surrounded by a coaching staff that’s been with him for most of his 21 NSU seasons to celebrate No. 300.

The staff has been with McConathy for its ninth total season (not consecutively), which is the third-longest tenured staff in the nation.

Assistant coaches Jeff Moore (14th season) and Jacob Spielbauer (13th season) have been by McConathy’s side each of those seasons, while assistant Dave Simmons is in second season back in Natchitoches after serving with McConathy from 1999-2006, McConathy’s first seasons as a Demon.

“It’s awesome to be there with your team and have the ones that have been there with me as coaches,” said McConathy, who is already Louisiana’s winningest collegiate basketball coach with 652 wins (352 at Bossier Parish Community College). “(Simmons) started with me, Moore’s done a remarkable job in his 14 years and Spielbauer’s been with me a long time – and it’s great to be a part of that.

“It’s longevity, and I would have liked to have won a lot more, but I’m thankful for the ones we got and we’ll try to add on to those. I’m thankful for the players and the administration. I told (NSU director of athletics) Greg Burke that we’ve had some great years and some tough years, and I’m grateful to him for hiring me and grateful for him sticking with me.”