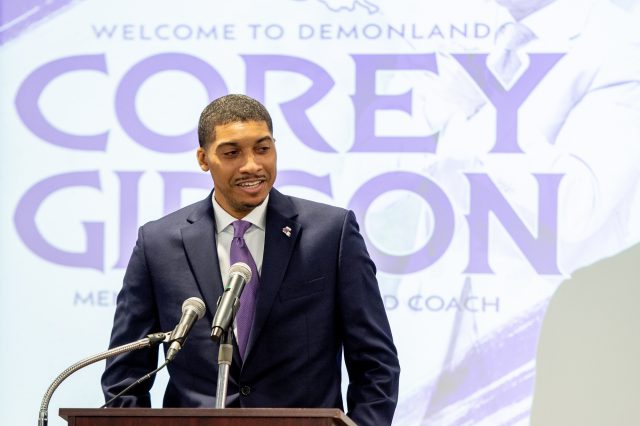 But when new Northwestern State men’s basketball coach Corey Gipson walked into Prather Coliseum on Tuesday night with his family, it even “smelled right.”

Gipson was introduced as NSU’s 10th men’s basketball head coach in its 110-year history Wednesday in front of fans and supporters in the Lucile Mertz Hendrick Room in the Friedman Student Union.

“It just smelt like basketball,” said Gipson, who spent the past seven seasons on the Missouri State staff, including the last six as an associate head coach. “It had a stench to it that just made sense.

Frankie is Gipson’s nearly 2-year-old child, a lanky daughter with a bubbly personality who started the press conference in her father’s arms.

His college-aged son Jordan took over Frankie duties while his other son, Tanner, will be looking for a new basketball and academic home as the No. 1-ranked point guard in Missouri in the Class of 2024.

“I hadn’t planned having Frankie up here with me, so sometimes you have to audible and make that adjustment, which is what life is about,” Gipson said. “But it’s a family affair.

“We have to do this together in order to have success. And when I say family, I mean not just my family, but the administration, current players and the community.”

When Gipson does step into Prather Coliseum to coach his first game, the basketball court will bear the name of his predecessor Mike McConathy.

McConathy retired after leading the Demons for 23 seasons and has accumulated the most wins in Louisiana college basketball history in his 39 total seasons, and Gipson said he wants to continue the legacy that McConathy built.

“I met (McConathy) when (NSU played at Missouri State on Dec. 19, 2020), and he’s a fine human being,” Gipson said. “You can see the glow and the love he has for others, so I know he’ll embrace my family and I as will the community.

“I met (McConathy) when (NSU played at Missouri State on Dec. 19, 2020), and he’s a fine human being,” Gipson said. “You can see the glow and the love he has for others, so I know he’ll embrace my family and I as will the community.

“You can’t replace a legend like (McConathy). He has a legacy in this town and a legacy in basketball that’s deep rooted as he has coaches from all across the country who have been under his tutelage. I don’t intend to replace him, I intend to lean on him, intend to be his brother and be his family.”

Gipson acknowledged that change can be painful, an experience he had too early in life when his mother died when he was 9 years old.

He recounted how his father remarried, and how he had to share the love he had for his biological mother with his new Earthly mother.

“I guarantee you this change won’t be harder than that … and just like we worked through that change as a family, we’ll work through this change with this new family.”

Aside from Gipson’s credentials and qualities as a coach, one aspect about Gipson that resonated was his family, said NSU athletics director Kevin Bostian.

“Missouri State athletics director Kyle Moats said that (Corey’s) wife April in particular is a rockstar, and you’re going to love having them in the community,” Bostian said. “It was clear that Gipson possessed all the qualities that we desired in a head coach.

“We wanted someone who was a strong recruiter and a developer of young men, not only on the court but off the court as well. Someone who would fit the culture of Northwestern State and express the passion, enthusiasm, energy and the hands-in-the-dirt, grind-it-out work ethic.”

“I want to give a special thanks to (NSU President) Dr. Marcus Jones, (vice president for external affairs) Jerry Pierce, (deputy athletics director) Patric Dubois and to Kyle Bowlsby from Bowlsby Sports Advisors for the many hours and late nights in helping us with the coordination of candidate interviews and background research.

“I would like to thank coach Mike McConathy for 23 years of building the foundation, the legacy, the tradition and the history of this program, and the lasting impression he’s left on the NSU and Natchitoches communities. Our process was quick but very deliberate and thorough … and I was pleased with the very, very strong interest in this position.”

While not a Louisiana native, Gipson did nail down a few specifics before stepping foot on NSU’s campus for the first time as a college head basketball coach.

“I learned how to pronounce Natchitoches, and I believe I’ve got that down pat,” Gipson said. “Before my flight here, I stopped by Popeye’s to get some of that Cajun chicken just to make sure I baptize myself before I got here.

“The people have been so warm and welcoming here, from the hospitality at the hotel to members of other coaching staffs, it’s been a real blessing. I’ve been in Louisiana and Texas to recruit, and I’m familiar with this land and the AAU programs and coaches. But it’s not about recruiting a certain area, it’s about recruiting the right person who comes in with the mentality we’re looking for. I’m not from Louisiana but it’s a divine situation where we feel like we’re the right fit for the program, and we’re very thankful for the opportunity.”