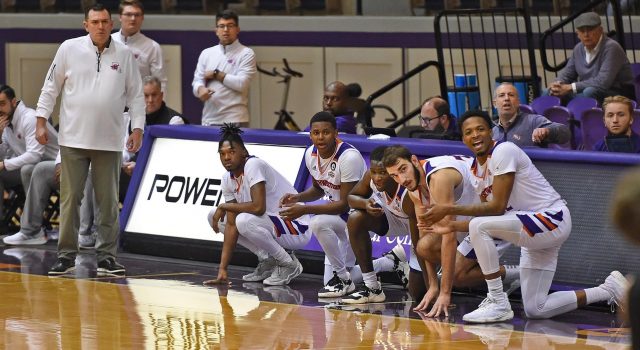 KATY, Texas – “All of your eggs go in the tournament basket.”

That’s been Northwestern State coach Mike McConathy’s thinking as he uses the regular season to build the necessary depth in an attempt to win the Southland Conference Tournament, a league that puts just one team in the NCAA Tournament.

McConathy turns into ‘Magic Mike’ in March as he’s posted a 19-10 record in his 14 previous SLC Tournament appearances with seven championship game appearances and three titles (2001, 2006, 2013).

He’s won at least one game in 11 of his 14 appearances, including the last five tournaments since 2013.

“It’s one of those things where you try to constantly get your pieces ready to play,” McConathy said. “We lost a piece (Monday), and we are hopeful that (point guard Brian White) will be able to play.

“Everybody has to be ready to play, and we’ve put people in every possible scenario we can to be ready for whatever is thrown at us. And then you have to have the mindset of getting to the tournament to win games. To win it all, you’ve got to beat them all as my Dad used to say.”

NSU has 12 players that have appeared in at least 20 games with at least 10 minutes per game.

The Demons will face a similarly deep McNeese team that won both of the regular season meetings with late surges.

McNeese has made at least 10 more free throws than NSU in each win, although it’s an issue in which the Demons have improved on by shooting 80 percent in the last nine games.

Senior LaTerrance Reed has been a recent factor in NSU’s free-throw success, making 16-18 in his last two games and averaging 14 points.

“Teams have been closing out hard on us at the 3-point line, and I think our percentages have reflected that,” Reed said. “So driving to take pull up jumpers, get to the rim or dump it off for the big guys has been a bigger part of our game.

“We’ve got to play a full game, and we have to rebound and get stops – that’s what the postseason is mainly about. Our coaches have been preaching stops because you can’t trade baskets in the postseason, and I think that’s what happened to us against SLU. When we’re on, we can play with anybody, and we’ve got the offensive firepower to do special things. If we can catch fire at the tournament, things can turn out pretty good for us.”

The health of NSU’s White will be key in that area as the Demons’ best on-ball defender.

“We need him because he can stay in front of guys, and that’s one of our weaknesses,” McConathy said of White, who leads the league with 106 assists and a 1.86 assist-to-turnover ratio. “He also gets people where they need to go in our offense and gets the ball from Point A, to B, to C, to D.”

The Cowboys thrive off their pressure defense turning into offense, ranking 43rd nationally with 15 turnovers forced per game.

While the Demons have struggled at times with turnovers, NSU has committed fewer than 15 turnovers in 12 of its last 15 games.

In a loss to Southeastern on Saturday, the Demons edged the Lions 25-24 in points off turnovers, a category in which McNeese averages 17 points per game.

NSU center Kendal Coleman will have a lot to say about another key category McNeese has won in the previous two meetings – rebounding.

Coleman ripped down a career-high 20 rebounds to go with 18 points, solidifying his place as an All-Southland Conference First Team selection with 15.5 points and 10.1 rebounds per game. He’s ranked 16th nationally in rebounds per game. It’s NSU’s first 20-rebound performance since 2010 (Will Mosley).

“I was surprised because I didn’t have realize I had 20 rebounds,” Coleman said. “It’s a mindset, trying to tip the ball out on offensive misses and then definitely going to get the defensive rebounds.

“As a team, we have to have a mindset that our record is 0-0. It’s win or go home, and we’ve got to bring it. Anybody can beat anybody is this conference, and nobody is really better than anybody else. If we bring a killer mindset, we’ll be good.”

McNeese is represented on the All-SLC team by third-teamer Christian Shumate (13 points, seven rebounds) and Freshman of the Year Johnathan Massie, who averaged five points and three rebounds per game with 62 assists.

Guard Zach Scott has led the Cowboys in scoring in each of McNeese’s wins against NSU, tallying 23 and 21 points, respectively.

“I think their size and athleticism – they have a lot of guys 6-foot-2 to 6-foot-6 that are really athletic – has been the difference in our two games,” McConathy said. “Kellon Taylor (10 points, six rebounds) is a big factor, and we had no answer for him in the first game because he got to the rim whenever he wanted (didn’t play the second game).

“Shumate is amazing on the offensive glass, and we have to keep them off the boards. We need more than just Coleman and (Larry Owens) to rebound for us.”

Not all the checkmarks go in the Cowboys’ column.

NSU is third in the league in 3-point shooting (34 percent), and McNeese ranks near the bottom allowing opponents to shoot 35 percent.

NSU is 2-0 all-time in the SLC Tournament against McNeese, beating the Cowboys in the 2001 tournament championship game and the 2015 opening round game.

While the Demons season is obviously over Wednesday without a win, should NSU get past the Cowboys, the path could be somewhat favorable in terms of matchups.

No. 3 seed New Orleans awaits this winner Thursday, a team the Demons topped by 10 points on Feb. 26 and lost by just one point in the SLC Tip-Off Event.

Southeastern, the No. 2 seed, is the semifinal matchup for this side of the bracket. NSU lost to the Lions in both contests, but the Demons blew a double-digit lead in the last 10 minutes on Jan. 15 before falling by five on Saturday.