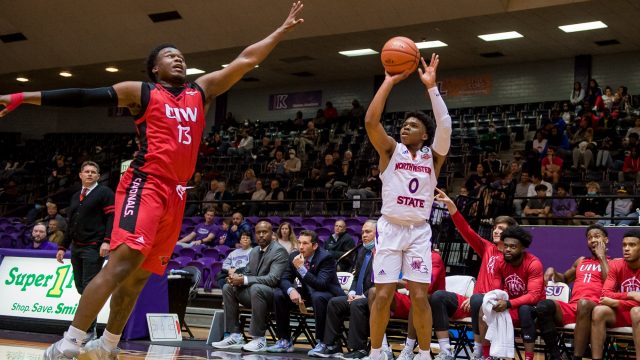 NATCHITOCHES – Northwestern State has experienced a small sample size of home games in Southland Conference play this season, but the Demons are about to get a heaping helping with five of the final seven games in Prather Coliseum.

That stretch begins with a “boomerang week” in which NSU (7-17, 3-4 SLC) hosts Houston Baptist on Thursday and McNeese on Saturday after traveling to those opponents this past week.

The Demons won both of their home conference games to date in impressive fashion, topping UIW 79-70 on Jan. 27 before disposing of Texas A&M-Corpus Christi 90-76 on Jan. 29.

“When you have a season in which you were away from home for 40 days (Dec. 18-Jan. 27), the players and coaches embrace the opportunity to play at home,” said NSU coach Mike McConathy. “This is a group that’s mature enough to play at home in the sense that they won’t try to do extra things to impress their friends or a group of ladies.”

Those home wins stacked on top of a 97-87 road victory at HBU on Feb. 3 in which the Demons tied a program record with 17 made 3-pointers. The three-game winning streak ended at McNeese on Saturday with a 93-84 loss in which the Cowboys ended the game on an 18-8 run.

“When you play teams in back-to-back weeks, you have to project what they did well and work on what we did poorly,” McConathy said. “You kind of meet in the middle in terms of preparation.

We have to get better defensively, especially in staying in front of people. We had been playing a little better defensively at the end of games, but against McNeese, their matchups caused us problems because they were just driving it to the rim.”

The Demons have eclipsed the 90-point mark in three of their last four games and are averaging 79.9 points in SLC contests, which ranks second.

Making shots is the simple answer as NSU leads in overall field goal percentage (48 percent) and from 3-point range (44 percent).

Freshman point guard Carvell Teasett ranks second in the league with 3.1 3-pointers per game and is shooting 43 percent in league play.

McConathy’s teams are known for strong finishes down the stretch of a conference season as his Demons are one of only two current SLC members that have secured a top-four seed in each of the last two seasons.

“I think one reason for that is we play so many people early in the season, and it builds depth so we can either adjust to a specific opponent or we have some experience down our bench if we have injuries,” McConathy said. “We have 10 to 12 guys we can draw from, and we were down three guys this past week but were still able to play 10.

“We’re also constantly trying to be positive, especially when you played the difficult nonconference schedule that we’ve faced this year. The real goal is to get to the tournament and finish strong.”

NSU features 12 players that average at least nine minutes per game with nine that score at least four points per game.

That setup should benefit the Demons with a conference schedule that features Thursday-Saturday games.

One player McConathy would like to play fewer minutes is freshman center Kendal Coleman. Coleman has played 35 or more minutes in three of the last five games, and when he plays heavy minutes on Thursdays, the impact is felt on Saturdays.

But the healthy return of players like Robert Chougkaz, Shaun Riley and Stavros Polatoglou should provide extra depth to NSU’s front line.

HBU forward Darius Lee is the reigning Southland Conference Player of the Week after averaging 31 points in two games, including 30 against NSU. Lee added seven rebounds and five steals per game that week as the Huskies ended the week with a 93-80 win against Southeastern.

But the Demons shut down Lee and his counterparts in the final minutes, ending the contest on an 18-3 run.

While NSU couldn’t find the same finish at McNeese on Saturday (the Cowboys ended the game on an 18-8 run), the Demons have had similar strong finishes recently. NSU closed out UIW with a 27-9 surge and pulled away from Texas A&M-Corpus Christi with a 20-8 run.

The Huskies in generating fastbreak points (20) and 25 points off 15 NSU turnovers, areas the Demons will be focusing on Thursday.

NSU has won four of the last five in the HBU series and would love to replicate its 61 percent shooting and 65 percent from 3-point range in the first win this season.

Thursday also serves as the inaugural Equality and Inclusion Night, which is a nationwide campaign to promote racial equality, LGBTQ+ rights, gender equity and economic equality.

The campaign was organized by Rising Coaches DEI Alliance, a group consisting of 12 minority and social justice coaching organizations.

The men’s team will be wearing special warm-up shirts in honor of “Eracism 2022,” promoting the idea of ending racism.

Fans not attending the game can catch the action on 95.9 FM, nsudemons.com (audio and video stream) or on the NSU app.