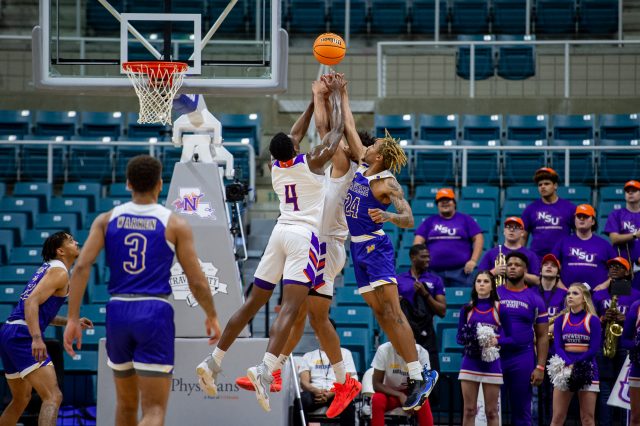 KATY, Texas – In the regular season, McNeese used large late-game surges to pull out a pair of regular-season wins against Northwestern State.

In the first round of the Southland Conference Tournament on Wednesday, the No. 7 seed Cowboys made their big push in the first half en route to an 80-67 win to end the No. 6 seed Demons’ season.

NSU (9-23) cut McNeese’s edge to 12 on three different occasions in the second half, but the Cowboys (11-21) had the answers to beat the Demons for the third time this season. McNeese is 3-10 in its last 13 games with all three wins coming against NSU.

“The matchup wasn’t very good for us because we couldn’t play Kendal Coleman and Larry Owens together,” said NSU coach Mike McConathy. “McNeese made some shots, but they had early advantages in points off turnovers and second-chance points that were really big.

“Brian White was hurt and couldn’t move laterally, so it changed our lineup. We figured it out in the second half, but we had already gotten in a hole and couldn’t get over the hump. Sometimes when you down like that, you hold on every shot and McNeese made every shot they needed to.”

In McNeese’s 21-2 run, Christian Shumate, an All-SLC Third Team selection, scored seven of his nine points during the run and was part of a 24-6 bench points edge, a typical strength for NSU. The Cowboys held a 34-18 bench points edge overall.

Another usual strength is the offensive efficiency of its posts, but the Demons Kendal Coleman and Larry Owens combined to shoot 3-13 in the first half as NSU shot 35 percent overall as a team.

The Demons shot better in the second half (53 percent) as Coleman and Owens finished 6-17.

“The coaches told me that the double team might come, and I tried to make moves quick or kick out to an open man,” said Coleman, who logged his 17thdouble double of the season with 14 points and 12 rebounds. “We were prepared for it and did the best we could.”

McNeese made 3 3-pointers during the run and five in the first half for a team that averages just six 3-pointers per game, but the Cowboys shot the Demons out of their zone defense. The Cowboys finished 7-19 from deep in the game and shot 50 percent from the floor overall.

Carvell Teasett contributed 15 of his 20 points in the second half with five assists to join Coleman in double figures. Houston native Cedric Garrett added 12 points (6-11 shooting) and five rebounds.

The Demons put together a 15-8 run to slice McNeese’s lead to 56-44, but the Cowboys scored six of the next eight points.

“We had the will not to lose, and we fought hard in the second half,” Garrett said. “McNeese made the shots and it was their game today.”

NSU ended the game on a 12-1 run, but McNeese’s free-throw efficiency (15-18) thwarted in serious comeback attempt given the Demons poor free-throw shooting (8-15).

McNeese’s Kellon Taylor led all scorers with 22 points on 7-8 shooting and 8-8 from the free-throw line. Taylor scored 16 points in the second half.

He was joined by Trae English (12 points) and Zach Scott (11 points), who shot 3-6 from deep along with Harwin Francois.

The Cowboys owned the rebounding edge (41-28) which led to an 18-7 advantage in second-chance points.

NSU did commit just 10 turnovers and held a 19-10 edge in points off turnovers, usually a McNeese strength.

This tournament was just the fourth time in 15 SLC Tournament appearances in which a Mike McConathy NSU team didn’t win a game as McConathy is 19-11 all-time.

Coleman joined the single-season 300 Rebound Club and finishes with 304, which ranks 13th in NSU history.