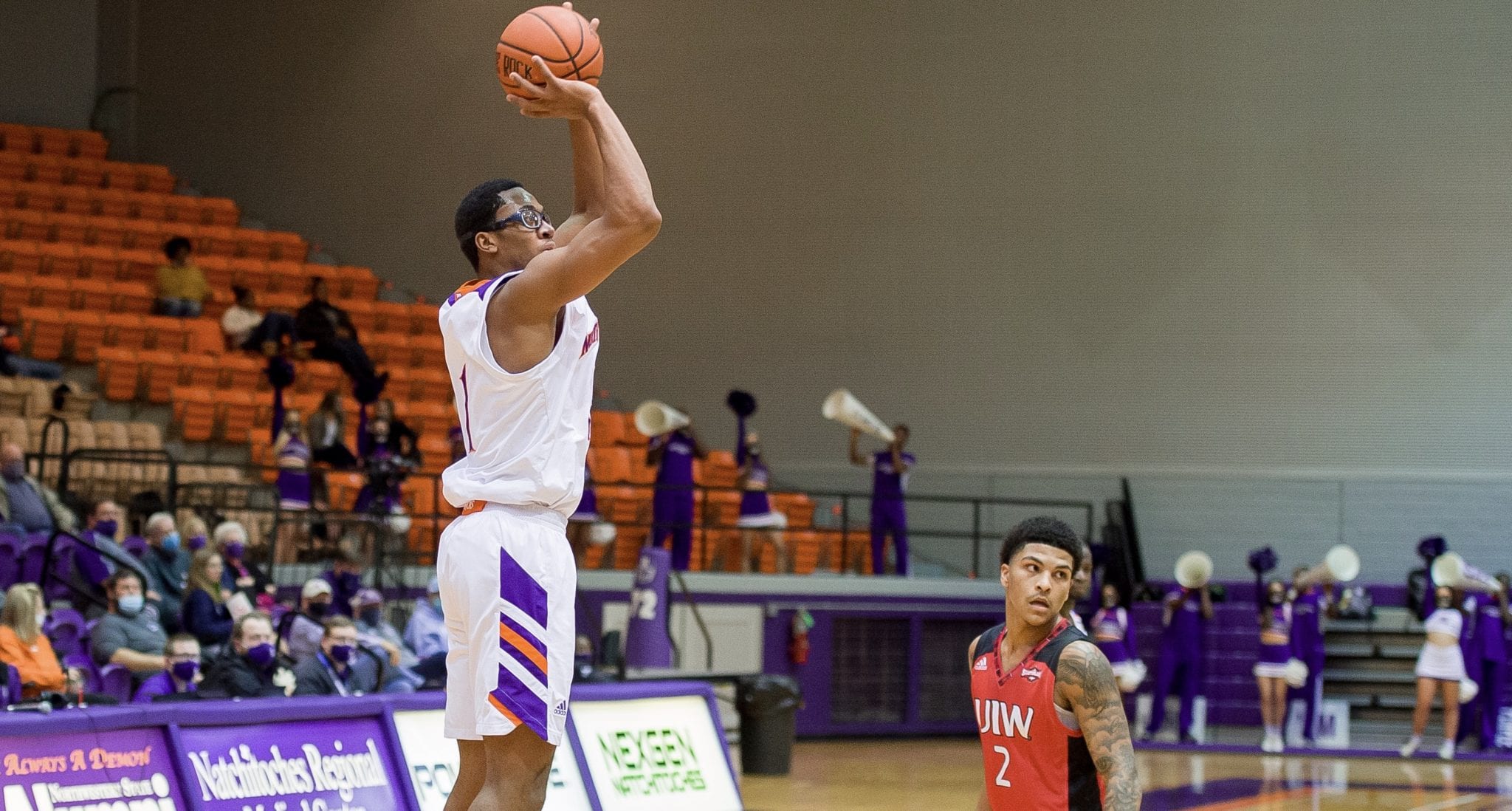 LAKE CHARLES – In one week’s time, the Northwestern State men’s basketball team learned how to close out a Southland Conference road game.

Locked in a taut matchup throughout most of the final 25 minutes Saturday, the Demons made play after play down the stretch to hold off McNeese, 78-75, inside Burton Coliseum on Saturday afternoon.

“We were very patient,” said 22nd-year head coach Mike McConathy, whose team shot a season-best 52.8 percent from the field. “I think we only had two bad shots the entire game. When we executed and took our time against the zone, that was really helpful. Trenton Massner made a shot that was big, and Jovan (Zelenbaba) made a shot. We had tremendous ball movement to make things happen.”

The Demons (2-12, 1-2) needed every well-executed possession and timely defensive stop in a game that was played within an eight-point window across the final 21-plus minutes of the game.

Never more did the Demons, who saw a late lead disappear in an overtime loss at Houston Baptist on Jan. 2, run their offensive better than when McNeese (6-5, 0-2) shifted to a 2-3 zone with a little more than 6 minutes to play.

Northwestern State countered by flashing Trenton Massner and Jairus Roberson to the free-throw line to upset the zone, but the biggest shot came from Zelenbaba, who drained a go-ahead 3-pointer with 5:18 to play to put the Demons up 62-60 – the last of 13 lead changes in the game.

The key bucket was part of a nine-point second half for Zelenbaba, who was one of three Demons to finish with 13 points.

“My teammates and my coaches told me to keep my chin up and keep shooting when I’m open,” said Zelenbaba, a sophomore guard who missed tying his career high by one point. “I listened to them, and it went in.”

Zelenbaba’s 3 was one of 14 attempted by the Demons, their fewest attempts from behind the arc in a game this season. It also was one of six made 3s, including a trio from LaTerrance Reed, whose buckets were all timely.

Reed snapped an 11-0 McNeese run with a tying 3 late in the first half and a pair of left-corner 3s in the second half – one that erased a one-point Cowboys lead and one that pushed NSU’s lead to four with 8:01 to play.

“If we take (a 3) just to take one, it puts us at such a disadvantage,” McConathy said. “If Slim’s on one of his barrages, then you have to go with it. LaTerrance Reed’s 3-for-5 was huge. The timing was unbelievable. He almost got a rebound off one he missed.”

The Demons paired a 60-percent second-half shooting performance with a defense that forced seven second-half turnovers, turning those into seven points.

Part of the NSU defense was limiting McNeese sharpshooter Dru Kuxhausen to a 1-for-5 performance from behind the arc. Kuxhausen entered Saturday’s game leading the nation with four made 3-pointers per game.

“It all starts on defense,” said Gregg, who tallied nine of his 13 points in the second half including five early points after halftime. “Great job by the wings. They were going through screens, fighting. They did a good job defending him, because Dru is a great shooter.”

The Demons return home Wednesday to face Nicholls as they continue their rotating home and road games. Tipoff is set for 6:30 p.m. against the Colonels inside Prather Coliseum.