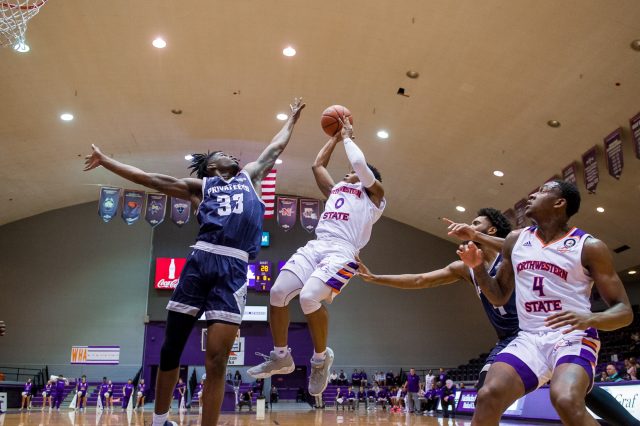 NATCHITOCHES – Northwestern State focuses on building depth throughout the season, and the Demons received contributions from an array of characters Saturday as NSU knocked off league-leader New Orleans, 87-77.

Brian White scored a season-high 23 points to lead five Demons with at least eight points, but NSU coach Mike McConathy could count key moments for all 11 players that appeared as the Demons (9-21, 5-8 Southland Conference) fended off surge after UNO surge in the second half.

The Privateers (16-11, 9-3 SLC), who has been atop the SLC standings for the entire season, sliced a 13-point to 79-75 with less than a minute remaining, but the Demons scored the final eight points.

“The play outside of the normal guys like Robert Chougkaz, who won’t pile up the stats, a Jovan Zelenbaba, a Jalen King, a Zurabi Zhgenti was the difference,” said NSU coach Mike McConathy. “Larry Owens, who has had some great games in his time here, had a monster game.

“It was a team win. Shaun Riley had a huge bucket in the first half and set a great pick to get Brian a bucket. I’m proud of the guys because they competed so hard. It was the tenacity, the want to, the ‘I’ve got to get it done’ mentality that Demon basketball has always been about. It’s been missing, but I’m so proud of these guys today. We laid it out all on the floor.”

UNO supplements its offense heavily from the free-throw line, but the Demons outdueled the Privateers from the line Saturday. NSU, which has more than 100 fewer free throws than its opponents this season, made 21-26 from the line compared to 14-22 for UNO.

Both White and LaTerrance Reed made 8-10 from the line, and NSU sunk nine free throws in the final eight minutes to hold UNO off.

“We’ve been preaching that all year, and we were able to attack to them early,” Reed said. “They are aggressive on defense, so our mindset was to be aggressive and pound it inside early.

“On the flipside, we were able to keep guys in front of us, lessen the fouls on our end, and then knock our free throws.”

UNO guard Derek St. Hilaire led all scorers with 25 points, but he shot 9-20 from the field, just 4-5 from the line and committed five turnovers.

Three of those turnovers came in the final minutes as NSU extended its lead to pull away.

Hilaire averaged 30 points in the previous two meetings with NSU, but the Demons’ zone defense slowed UNO’s penetration and played a role in the Privateers’ 18 turnovers.

NSU cashed in those mistakes for 23 points, its best in SLC play.

UNO’s late pressure defense forced NSU into three turnovers as the Demons couldn’t get the ball across halfcourt, but the Demons committed just 13 turnovers overall.

But White delivered the dagger with a 3-pointer with the shot clock winding down to give NSU a nine-point lead with 1:37 remaining.

“UNO denied us the ball, so we try to beat defenders and go make plays,” said White, who broke out of an offensive slump that included just 13 points combined in his last four games. “We shot the ball bad Thursday against Nicholls, and we knew UNO was one of the top teams in the conference.

“We knew we had to bring it early and keep it on them the whole game. We went to our zone defense because UNO doesn’t shoot it quite as well as other teams. St. Hilaire is a great shooter, so we tried to stay on him and make other players beat us.”

Coleman didn’t get his third double double against UNO this season, but the pairs rebounding success allowed NSU to outrebound UNO 39-37 despite playing a zone defense for the entire game.

“The last time we played them, UNO outrebounded us and Nicholls did so Thursday. “We had to do a better job, and we’ve been talking about it.

“We are capable, but we can’t expect Kendal to get every rebound. When he got in foul trouble in the second half (played 24 total minutes), somebody else stepped up. This team believed in the game plan and believed in this coaching staff, and they really came together. They were connected today.”

After a sluggish offensive start to the first half, Reed scored seven straight NSU points to counterpunch a UNO push.

St. Hilaire converted on one of three UNO three-point plays in the half to keep NSU to a 38-31 halftime lead.

The beginning of the second half was the Larry Owens show and the big man scored eight points in the first four minutes of the period.

White scored eight points during the run and assisted on a Robert Chougkaz 3-pointer. Jovan Zelenbaba capped the spurt with a 3-pointer of his own.

The Demons play the regular-season finale against a Southeastern bunch that is coming off wins against UNO and Nicholls this week. The Lions erased a 21-point deficit Saturday against the Colonels to put themselves back in the championship hunt.

NSU kept itself mathematically alive for the No. 4 seed and first-round bye in the SLC Tournament. The sixth-place Demons are chasing HBU (5-6 SLC) and Texas A&M-Corpus Christi (5-6 SLC), whose play each other late Saturday night.