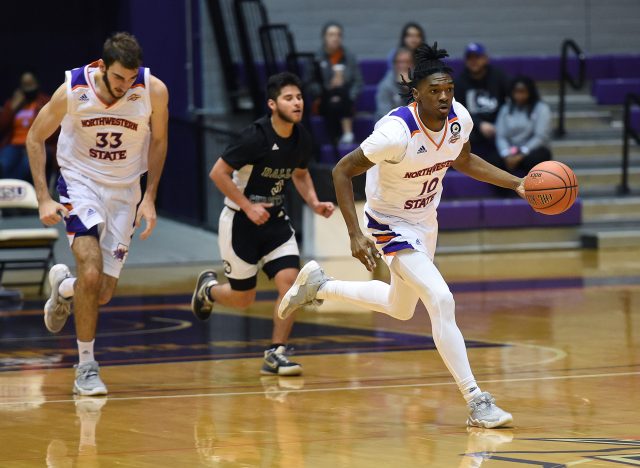 THIBODAUX – Despite losing late leads against two of the better Southland Conference programs in the past week, the Northwestern State men feel like a breakthrough is just around the bend.

NSU appeared to be in control at SLC Tip-Off champion Southeastern on Jan. 15, leading by 10 with minutes to go and by five with five minutes remaining.

But the Lions scored the last six points in the final two minutes to pull out a 79-74 victory as NSU struggled from the free-throw line, making just 6-17 in the second half.

The Demons also fell in the final minutes (80-79) to New Orleans (Saturday’s opponent) despite having three shots on the final possession to secure the win in a game in which NSU shot close to 50 percent.

“I’m very hopeful that we can pull confidence even from those losses,” said NSU coach Mike McConathy. “There is the fact that in today’s age, everybody wants it right now, but a lot of times, teams aren’t ready to get on a run.

“When you keep losing, it pulls you further and further down, and it creates a problem. But the flip side is that we’ve played some pretty good basketball. There are some really positive things, we just have to get all of our pieces on the table at the right time, and we’ll experience success.”

NSU did experience that close game success three games ago against UIW when Cedric Garrett tipped in a miss for a three-point play in an 83-80 victory.

The Demons are 1-3 in games decided by five points or less, but NSU is quickly picking up experience in that category as their last three contests have been decided by five or less.

“We’re right at the door ready to kick it down, to break through the ice,” said Owens, who’s averaging 16.5 points and 8.5 rebounds in his last two games. “We have to learn to keep the lead and keep pushing. If we’re up by 10, let’s go up by 15 and stop settling – keep our foot on the gas.

“We’re trying to be the types of leaders that don’t just lead on some days, but being a leader every day. The younger guys look up to us just like we looked up to guys like C.J. Jones and Jalan West, and we just have to keep it going.”

Against SLU, Owens scored a season-high 21 points on 9-12 shooting, which is his second-highest output of his career.

The fight to lead the new-look SLC is underway, and the Demons want to reverse recent history as the Colonels have won the past four meetings, including a tilt in the SLC Tournament.

The Demons last win in the series did come in Thibodaux as Chudier Bile nailed a buzzer-beating 3-pointer to snatch a 73-72 win.

Both teams lost their league opener as neither team wants to be staring 0-2 in the face.

“Gordon is a phenomenal player, and they really feed off of him,” McConathy said of Gordon, who has already won five SLC Player of the Week honors this season. “Nicholls has really nice pieces and do a great job, and coach Austin Claunch has them competing, and they’ll get after you.”

The Colonels love to turn its defense into offense and push the ball, something NSU has subverted much better in recent weeks.

The Demons have even developed a transition game of their own as they seek easier points in the open floor.

“It’s very important to take care of the ball and get back in transition, which we’ve done a lot better job of that recently,” McConathy said. “You can get back on defense when you have guys like (Owens) and Kendal Coleman getting rebounds and putting the ball back up.

“We’re pushing the ball better as well, and the key to that is having point guards that get it up the floor and pass to the wings and make things happen. Defensive rebounding is a big part of that, and we’ve been winning the rebounding battle with more regularity.”

NSU has outrebounded its last three opponents and 10 out of 18 this season, including plus-18 at SLU.

Freshman Kendal Coleman posted his seventh double double in eight games as he logged 12 points and a season-high 14 rebounds. He’s averaging 9.1 rebounds per game to pair with his 15.2 points.

NSU finishes its three-game road swing to start conference play Saturday at UNO before finally returning to Prather Coliseum to play UIW on Jan. 27, its first home game in 40 days.