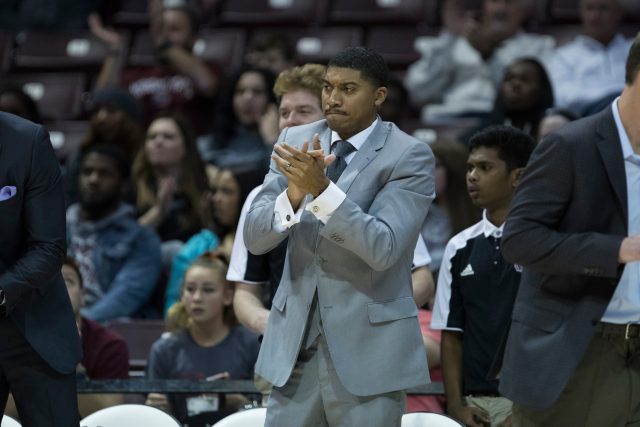 Gipson, 41, spent seven years on the Bears’ staff, burnishing a reputation as a standout recruiter and talent developer. His hiring is subject to the approval of the Board of Supervisors of the University of Louisiana System, which governs Northwestern State University.

Gipson succeeds Mike McConathy, who retired a week ago after 23 years as the Demon head coach and Louisiana’s all-time leader in basketball coaching victories. Gipson will be introduced to the media and NSU supporters at 10 a.m. Wednesday at a news conference in the Lucille Mertz Hendrick Room (Room 121) inside the Friedman Student Union on the Northwestern State campus.

“This is very humbling, first and foremost, to be able to take the helm of a program with so much history and tradition,” said Gipson, who becomes the first African-American head coach in program history. “My family and I are elated to be going to a historic community and a program where coach McConathy has built such a great legacy. He paved the way for me and my family to come in and have a chance to push that legacy forward. It is an opportunity we do not take lightly. We see it as a privilege.

“I want to thank the administration – Dr. Jones, (Director of Athletics) Kevin (Bostian), (Executive Vice President for External Affairs) Jerry (Pierce) – for trusting me to take the helm of the program.”

During his seven-year stint at Missouri State, Gipson coached a trio of Missouri Valley Conference Newcomers of the Year – Tulio Da Silva, Dequon Miler and Alize Johnson. Johnson has spent the past four seasons on NBA rosters, appearing in 23 games this season for Chicago, Washington and New Orleans.

This season, Isiaih Mosley had a 50-40-90 season (50 percent shooting from the field, 40 percent from 3-point range and 90 percent from the free-throw line), one year after being named the captain of the Missouri Valley Conference’s Most Improved Team.

During Gipson’s six years as the Bears’ associate head coach, Missouri State averaged 17.6 wins per season. The Bears recently finished the 2021-22 season with a 23-11 record and a berth in the National Invitational Tournament.

Gipson’s success at each of his coaching stops was important, but it was simply part of the package that landed him his first head coaching position.

“As we went through the search process, it was clear Corey possessed all the qualities we desired in a coach,” Bostian said. “We look forward to him building upon the great legacy coach McConathy built here at Northwestern State. Corey has been successful at every stop in his career. He is a strong coach and recruiter, but more importantly, he has a track record of developing student-athletes into better young men on and away from the game of basketball.”

As an assistant coach and recruiting coordinator with the Governors, Gipson helped develop Chris Horton into the program’s all-time leader in blocked shots and one of just 13 players in Division I history to score 1,500 points, grab 1,000 rebounds and block 300 shots.

NSU president Dr. Marcus Jones said, “Corey Gipson has the professional experience and the family-oriented personal image and reputation to make him an excellent fit for the head men’s basketball coach position at Northwestern.”

He added, “I am confident that Corey will maintain the rich history and traditions of the program as coach Mike McConathy did for 23 years before his retirement and will work to guide NSU basketball to even greater success on the court and increased support from students, alumni and other fans.”

Gipson spent three years at UNC Greensboro from 2009-12, the last two as the associate head coach.

A native of Sikeston, Missouri, Gipson began his coaching career at Virginia State University, a Division II school in Petersburg, Virginia. There, Gipson spent four seasons as recruiting coordinator, helping build the base of a 2007 conference championship team led by first-team all-conference selection and Defensive Player of the Year Avis Wyatt.

“The coaching profession is so dynamic,” Gipson said. “Every step and post is an opportunity to learn the game better. This is a privilege and a blessing. My family, we handle things in a spiritual way. We put our faith first. This feels right. It feels divine. We’re coming in to roll our sleeves up and do the best job for the community and the university.”

Gipson’s playing career included two seasons as a point guard at Austin Peay where he helped coach Dave Loos’ Governors become the best defensive team in the Ohio Valley conference. In Gipson’s two seasons, the Governors were a perfect 27-0 at home as he averaged 7.7 points, 2.3 rebounds and 2.1 assists per game while making 94 3-pointers.

A two-time graduate of Austin Peay and the 2012 Austin Peay Young Alumnus of the Year, Gipson began his playing career at Three Rivers Community College in Poplar Bluff, Missouri, before transferring to Austin Peay to finish his career.

Gipson was a Mr. Show-Me Basketball nominee as a senior at Richland High School, averaging 30.9 points per game and earning consensus all-state honors.

He and his wife, April, have three children – Jordan, Tanner and Frankie.