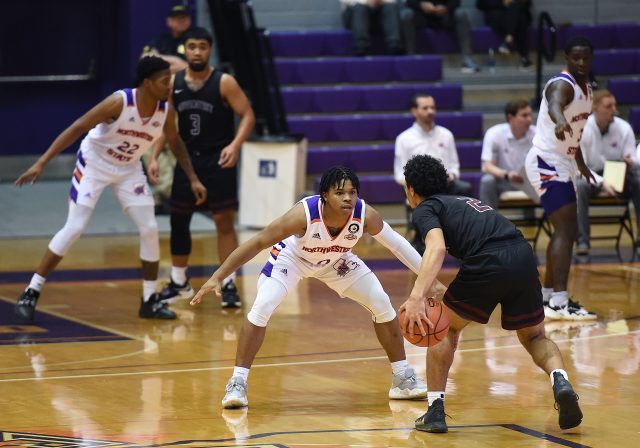 HAMMOND – Northwestern State’s tough nonconference schedule that included seven top 100 NET teams means that the Demons will be prepared for whatever they see in the Southland Conference.

But the SLC Tip-Off event this past week provided NSU (4-13) an opportunity to play close games down the stretch as the Demons prepare to open SLC play at Southeastern (8-9) on Saturday at 4 p.m.

The contest will be broadcast on ESPN+ with audio options on 94.9 FM, nsudemons.com and the NSU app.

The Demons went 1-1 in Tip-Off games decided in the final seconds after having just one other game this season decided by five points or less (a loss to Stephen F. Austin).

“The main positive out of the tournament is that we played like opponents and were competitive,” said NSU coach Mike McConathy. “We were up by 10 against Incarnate Word, and we figured out a way to win when they came back, and that’s big for us.

“We didn’t finish against (New Orleans), but we were still in a position to win despite scoring just two points in the final 4:34. A schedule with this many guarantee games really weighs on your mind because of who you’re playing, and it can beat you down. So to have an opportunity to play like opponents before the conference schedule actually starts is a positive.”

The Demons knocked off UIW 83-80 thanks to a Cedric Garrett three-point play on a tip-in with 17 seconds left.

Garrett again hammered the offensive boards against UNO with two on the final possession, but none of NSU’s three attempts went in as the Demons couldn’t hold their late lead in an 80-79 loss against UNO.

Southeastern was a big beneficiary from the Tip-Off event as the Lions shot their way to the title in three wins.

SLU, which is on a four-game winning streak after Wednesday’s win against Tougaloo, made 40 3-pointers in the three-game event (13 per game) and make 36 percent from deep overall.

Six Lions have made double-digit 3-pionters led by Ryan Burkhardt (44) and Gus Okafor (30), the leading scorer with 14 points per game.

“Southeastern is playing extremely well right now and have great team chemistry, and coach David Kiefer is doing a great job,” McConathy said. “They are defending and shooting the ball well, and Burkhardt is one of the best shooters in the country.

“SLU is riding high right now, but at the same time, I think our team has the ability to do some things that can be effective.”

The Demons are expected to be at full strength come Saturday and have recently flashed a prowess from the perimeter of their own.

NSU warmed up to 37 percent from 3-point range in its last six games, improving to 32 percent overall. The Demons have had four of their best shooting performances in that stretch, including 11-25 at No. 1 Baylor, 8-21 at Texas A&M and 11-27 against Southwestern Adventist.

Freshman point guard Carvell Teasett has made five or more 3-pointers in five of his last six games and is shooting 38 percent overall from deep.

McDonald is NSU’s leading 3-point shooter with 24 at a 41 percent shooting clip.

Players like junior Brian White (7.7 points per game in the tournament), Robert Chougkaz (career-high 14 against TAMU-CC), sophomore Jovan Zelenbaba (13 points vs. UIW) and Larry Owens (12 points and nine rebounds against UNO) prove the Demons have many options.

“We are a deep team, and on any given night, anybody can step up,” McConathy said. “If Brian can continue to stay healthy, he’s playing with a lot more passion and intensity right now.

“We have to maximize what we do well and really lock in and be effective in those areas, and then we have figure out a way to win games at the end, and we’ll be in a good position.”

White said NSU, which features six newcomers including two primary starters, benefitted from getting a taste of league play without the games counting in the league standings.

“It was good to get a feel for the teams and the officiating we’ll see in the league,” White said. “We got great learning experiences in those close games because we are still a young team.

“It would be great to get the first one at Southeastern because we do turn around and have two more tough road games against Nicholls and UNO next week.

With Southeastern being one of NSU’s oldest rivals (the 106 wins is NSU’s most against a current SLC member), the Demons’ sweep this past season was especially important to snap the Lions’ six-game winning streak in the series.

The Demons pulled out a 73-68 win in Hammond in which Teasett drilled a 3-pointer with two minutes left to stem a massive SLU comeback before thumping SLU 79-61 in Natchitoches.

The series has been plagued by electrical oddities as the last contest in Natchitoches was delayed by 90 minutes and both teams warmed up under the glow of generator lights. The lights went out during the 2020 contest in Hammond as SLU had a 21-point lead. The Demons switched on after the lights came back and nearly pulled off the comeback in a 95-92 SLU win.

NSU has finished in the top five of the SLC standings in each of the last two seasons, only one of two current members who’ve accomplished that. NSU earned the No. 4 seed in the tournament those two years with Nicholls winning the regular season title in 2020-21 and finished second the year before.

Southeastern finished ninth in the league with a 5-10 mark a year ago and is a combined 10-25 in SLC play under Kiefer, but the Lions appear to be on the rise this season.

The Demons play their first three conference games on the road with a swing through Nicholls and UNO this coming week.