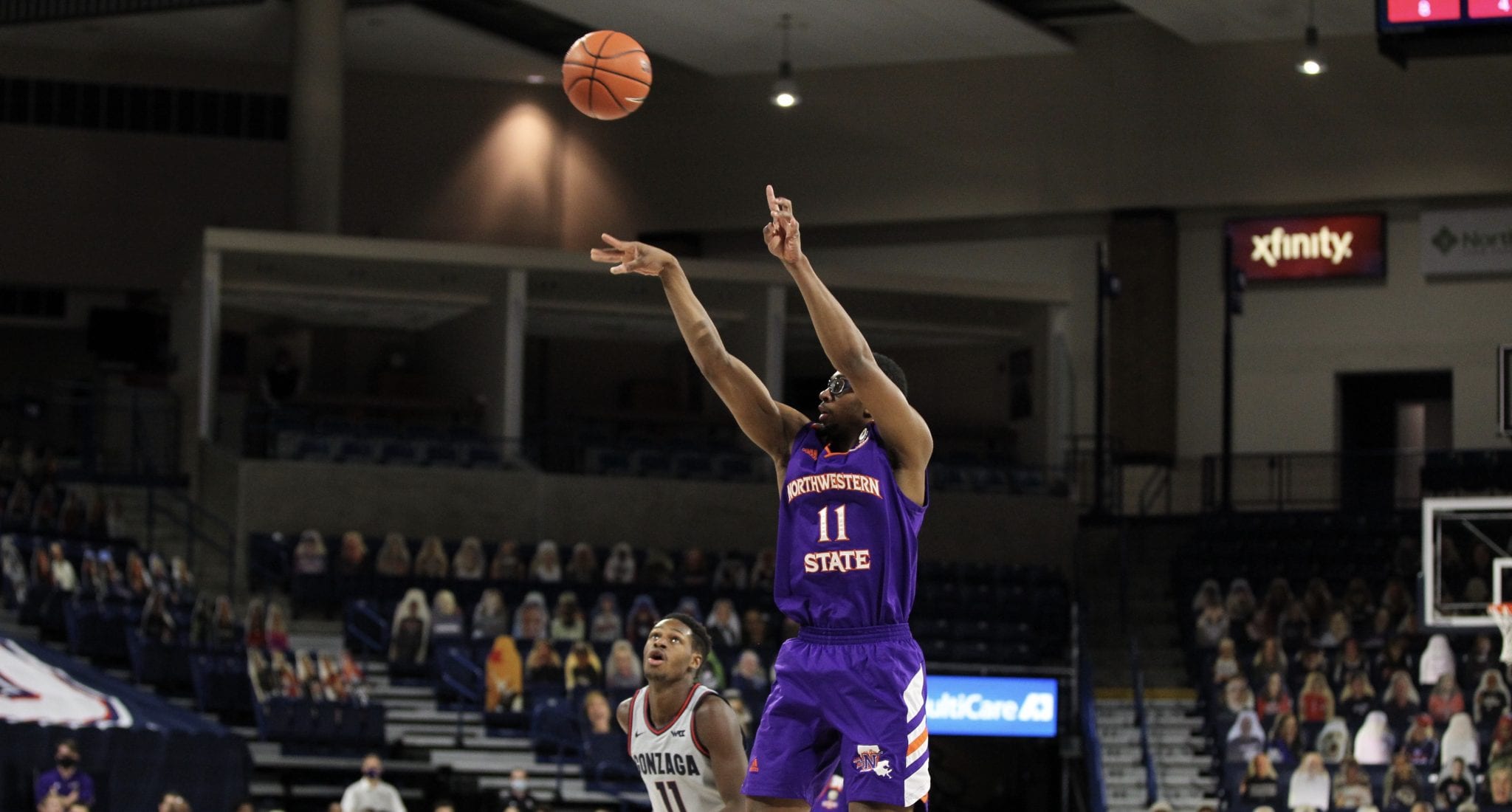 The time of the game was the same as was the opponent.

The Northwestern State men’s basketball team’s performance on either side of halftime could not have been more different.

Facing the No. 1 team in the country for the second straight night Tuesday, the Demons shook off a dismal first half to deliver a virtuoso second-half offensive surge before falling 95-78 to No. 1 Gonzaga inside the McCarthey Athletic Center.

“We decided to play basketball,” head coach Mike McConathy said of the differences in the two halves. “We let some guys sit and watch who didn’t come out ready to play. They decided to come and play. It helped that Slim (Jairus Roberson) came out hot. It helped that Larry (Owens) was really good the first 1:41 of the second half. We fed off that.

“Defensively, they missed some shots. We made some shots. We held them to eight offensive boards versus 18 a night ago. We still left a lot on the table. The stat of the game is we had one turnover in the second half.”

Northwestern State was even more efficient from 3-point range, connecting on 10 of 13 long-range shots in the second half while committing only one turnover. NSU’s 61 points were the most scored against Gonzaga (6-0) in a half since 2010.

That offensive efficiency allowed the Demons to trim their 26-point halftime deficit to 11 with 6:58 to play, and it came from up and down the NSU roster.

Jairus Roberson sparked the second-half uprising, sinking his first three shots of the half en route to a 15-point second half in which he went 4-for-6 from 3-point range. After playing just three minutes each in the first half, Roberson and Trenton Massner (14) combined for 29 of the Demons’ 61 second-half points.

“It was by design, because I didn’t think they came to play,” McConathy said. “Jairus was amazing. He was 4-for-6 from 3. He made his first three shots of the second half. Then it got tough, and they started face-guarding him. What it did was it opened up driving lanes everywhere else. It was a heck of an effort. I’m really proud of the guys.”

Gonzaga built its 26-point halftime lead by overwhelming the Demons inside and taking advantage of 16 first-half NSU turnovers.

The Zags tallied 34 points in the paint in the first half, outscoring the Demons by 30 in the first 20 minutes. The 16 NSU turnovers turned into 17 Gonzaga points.

NSU reduced that advantage to 12 in the second half, but Drew Timme proved to be the difference.

“We didn’t have an answer for him,” McConathy said. “When we made our run, they’d just throw it into him.”

Zelenbaba was a perfect 4-for-4 from 3-point range as the Demons shot 50 percent from long distance, connecting on a season-best 12 3-pointers.

“It was pretty special, considering who you’re playing,” McConathy said. “When we went really, really small, Jamaure (Gregg) and Larry did an unbelievable job in the post. Larry was a beast down there. Brian White came in and gave us something that created a problem. They had a guarding down issue. Yeah, you got beat by the best team in the country, but you went out and competed.”

The Demons conclude a stretch of five games in six days with a 4 p.m. Central matchup at Washington State on Wednesday. That will be the first meeting between the Cougars and Demons.