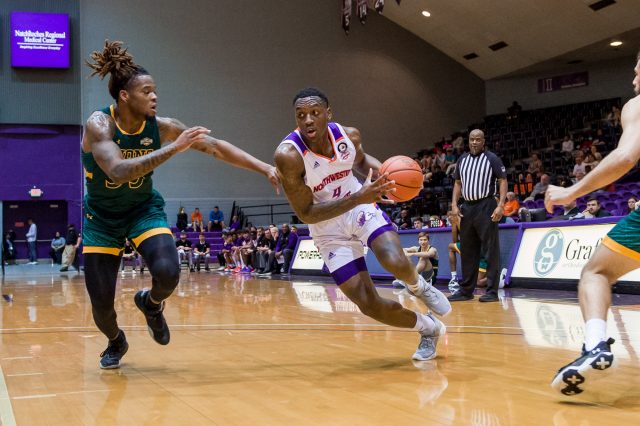 His 18-point, 20-rebound effort against Southeastern on Saturday gave league coaches one final reminder, and those coaches voted Coleman to the All-Southland Conference First Team and All-Defensive Team, the SLC announced Monday.

Coleman is the first All-SLC First-Team pick and All-Defensive pick at NSU since Ishmael Lane pulled the double duty in 2019.

The second-year freshman from Captain Shreve averaged a double double this season with 15.5 points and 10.1 rebounds per game, which ratcheted up to 15.6 points and 11.5 rebounds in SLC play.

Coleman surged defensively in the second half of the season, recording 27 of his 38 blocks in league games while totaling 30 steals this season, which ranked second on the team.

His 16 games of double-digit rebounds was highlighted by that 20-rebound effort, NSU’s first 20-rebound performance since 2010 (Will Mosely, 21).

Coleman is eight rebounds shy of becoming the 13thDemon in school history to record 300 rebounds in a season.

He finished as the SLC’s top rebounder and particularly excels on the defensive glass, where his 7.41 defensive rebounds per game ranks 12th nationally.

The 6-foot-8 center is one of the most efficient scorers in the league, shooting 55 percent to rank second in the conference and 31st nationally.

Coleman finished the regular season with 15 double doubles in his last 21 games before the Demons gear up to play McNeese on Wednesday in the Southland Conference Tournament.

Aside from racking up numbers against SLC teams, which included double doubles in five of seven games against the league’s top three seeds (Nicholls, UNO and SLU), Coleman also did damage against a difficult non-conference slate.

He posted double doubles against LSU and Texas A&M while averaging around 19 points per game against LSU, Oklahoma, SMU and Tulsa, shooting 70 percent in those games.

Coleman was the focal point for defenses most of the season, but his ability to shoot the mid-range jumper, score from the block and develop an ability to pass out of double teams made him a difficult matchup.