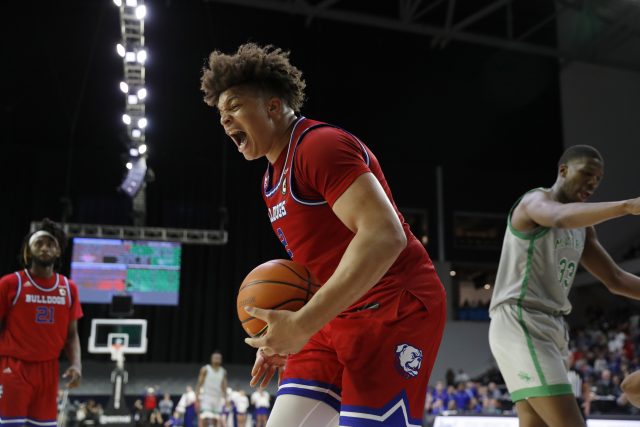 FRISCO, Texas – Louisiana Tech advanced to the C-USA Tournament Finals on Friday by outlasting North Texas in a 42-36 defensive slugfest inside the Ford Center at The Star.

However, the ‘Dogs found their offensive rhythm against one of the elite defenses in the country in North Texas (24-6).  They ended up making seven of their final 12 shots, going on a 15-0 run in the process to take a 21-13 lead into halftime.

LA Tech tacked on a three-pointer by Keaston Willis (one of his four on the day) and a made jumper by Kenneth Lofton, Jr. to build its largest lead of the game at 26-13 with 18:09 to go.

The Bulldogs were only able to muster four made field goals the remainder of the game.  And despite the Mean Green putting together two separate runs of 6-0 and 8-0, the defense by the ‘Dogs was stellar.

UNT got its deficit down to one possession on just one occasion, trailing 35-32 with 2:15 left, but more defensive stops and clutch free throws by Lofton, Amorie Archibald and Cobe Williams help put the Bulldogs into the tournament title game for the first time since 2014.

Willis and Williams each tallied a team-high 12 points while Lofton recorded nine points and 12 rebounds.

“We knew this was going to be a gritty game.  Not just because of it being in March and it being in the conference tournament, we knew it was going to be because of the type of games we have had with North Texas in the past.  We knew we were going to have to defend because we knew they were going to.  It is something we have tried to get better at all year long.  Our whole team did it today.  We started off slow offensively, but our defense kept us in it and was able to help us hold the lead down the stretch to come away with a great win.”

·        With the victory, LA Tech advanced to its first tournament final since they did in its first season in Conference USA back in 2014.

·        With the win, LA Tech now leads the all-time series against North Texas, 28-15.  The Bulldogs snapped their four-game losing streak to the Mean Green.

·        For the 11th time in the last 12 meetings between LA Tech and North Texas, the game was decided by seven points or less.

·        It was the lowest combined scoring game in C-USA Tournament history at 78 points.  The previous record was 92 points.

·        Keaston Willis scored 12 points while making four three-pointers.  He has made 11 three-pointers in the three C-USA Tournament games and now has 93 for the season, the second most in program history.

·        The Bulldogs improved to 25-5 all-time when Cobe Williams scores double-digit points.  He had 12 versus the Mean Green.

·        Kenneth Lofton, Jr. came one point shy of a double-double with nine points and 12 rebounds.  He has pulled down 33 rebounds in the three C-USA Tournament games.

LA Tech advances to the C-USA Tournament finals where it will take on the UAB. The matchup is set for 7:30 p.m. CT on Court A of the Ford Center at The Star and will be nationally televised on CBS Sports Network.