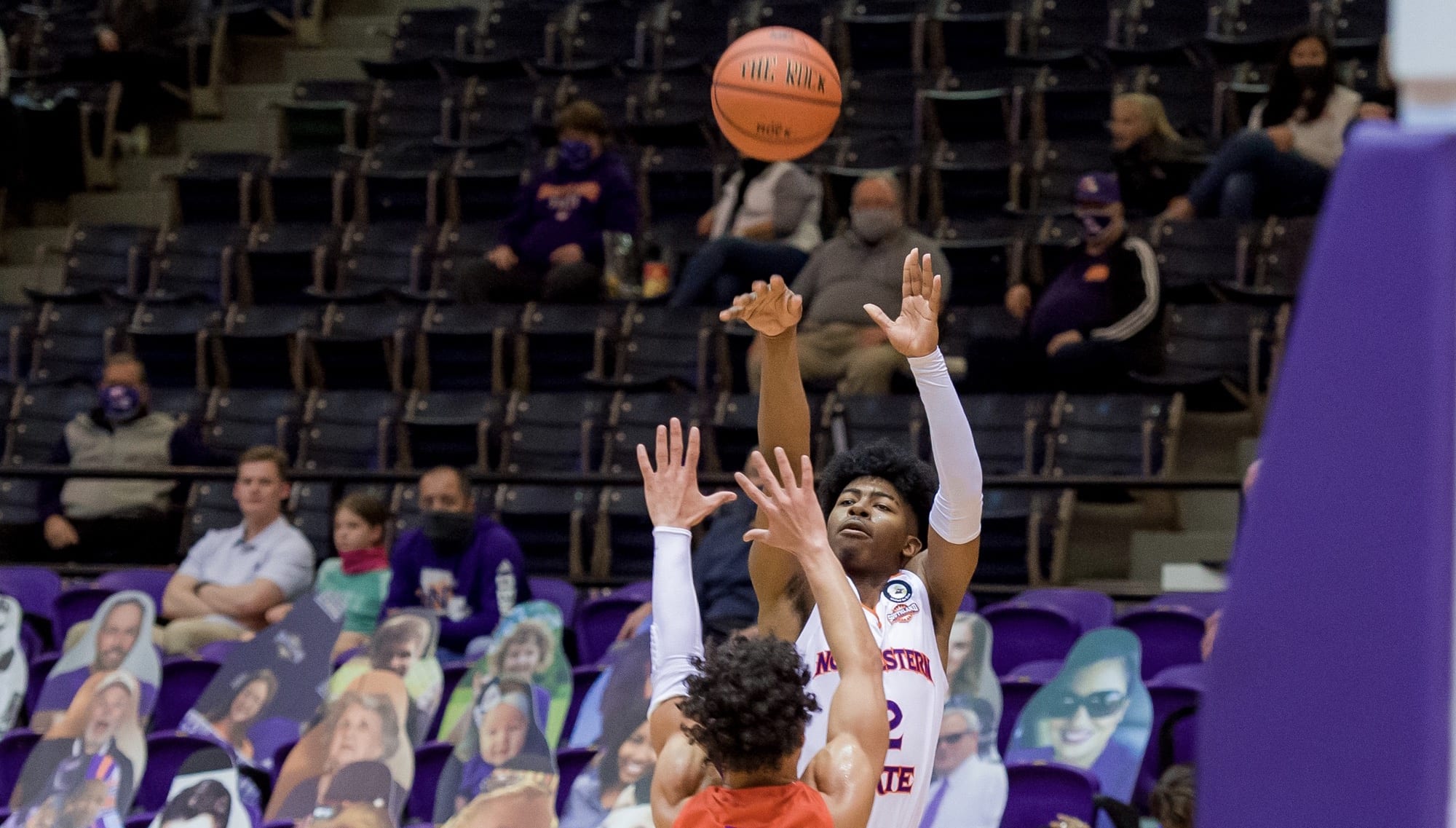 Teasett scored or assisted on 20 straight Northwestern State points in the second half of its Southland Conference men’s basketball matchup with Houston Baptist, helping the Demons hold on for an 86-80 win that extended their win streak to six games.

“There’s one thing that led into that – and it was unbelievable what he did – but we made an adjustment offensively which allowed him to get loose,” 22nd-year head coach Mike McConathy said. “We had been so stagnant offensively, and he just took advantage of it. I’ll be honest, I’ve had some great ones like Zeek Woodley and Jalan West, who could light it up, but that was a pretty big shooting exhibition.”

With Northwestern State (8-14, 7-4) trailing 60-57, Teasett went to work, starting with a wraparound pass to set up a Jamaure Gregg layup with 7:54 to play. Then came the shooting exhibition that led McConathy to recall some of NSU’s most recent binge scorers.

Starting with his game-tying 3 at the 6:51 mark, Teasett sank five straight 3-pointers and split a pair of free throws in a six-possession stretch that turned a three-point deficit into a seven-point NSU lead.

Teasett bookended the blitz by threading a perfect pass to Trenton Massner for a layup and an eight-point Demon lead with 2:02 to play.

“I was just taking the right shots, not hesitating because I have a problem with hesitating, and it throws my shot off,” said Teasett, who hit 7 of 9 3-pointers and finished with a career-high 25 points. “After I hit two, I was like, ‘I’m just going to keep letting it go.’ They kept hitting the bottom of the net, so I kept shooting.”

The Demons needed every one of Teasett’s big shots and big passes because for the second time in as many meetings this season, the Huskies (4-14, 3-7) erased a double-figure Northwestern State lead to take a second-half advantage.

Trailing by 13 after Massner buried a 3-pointer with 19:03 to play in the game, the Huskies saw their freshman guard, Brycen Long, shoot them back into the game. Long hit all four of his 3-pointers in the second half – including three in a 1:51 stretch that whittled a 12-point NSU lead to four.

HBU took its first lead of the game with 9:24 to play on a pair of Za-Ontay Boothman free throws.

The surge was reminiscent of what the Huskies did on Jan. 2 when they used a second-half rally to force overtime and grab a six-point win.

“During a free throw, I was talking to one of their players and said it felt like here we go again,” said Massner, who finished with 17 points and 10 rebounds for his first double-double of the season. “We got out on the right side of it this time, so it was a much better feeling. Rebounding down the stretch was key. Everybody had some big rebounds. Whoever came in made big plays.”

While Teasett and Massner were the only two Demons to crack double figures, five other players had either six or eight points, including Jovan Zelenbaba, who knocked down a his only two 3-point tries as part of an overall 13-for-25 performance from the 3-point line for the Demons.

“He did a great job and had some great moments,” McConathy said of Zelenbaba, who set a career high with three steals. “He’s going to be a really good player. He’s such a great athlete that he gets to going a little too fast.”

That balanced attack allowed the Demons to extend their longest winning streak since the 2013-14 season, and it gave NSU a win in a game where it did not play its best basketball.

“The best part of this game was we not me,” McConathy said. “Everybody was fired up when those shots went in. Everybody fed off that.”

The Demons return to action Wednesday night when they host Stephen F. Austin. Tipoff is set for 6:30 p.m. inside Prather Coliseum.