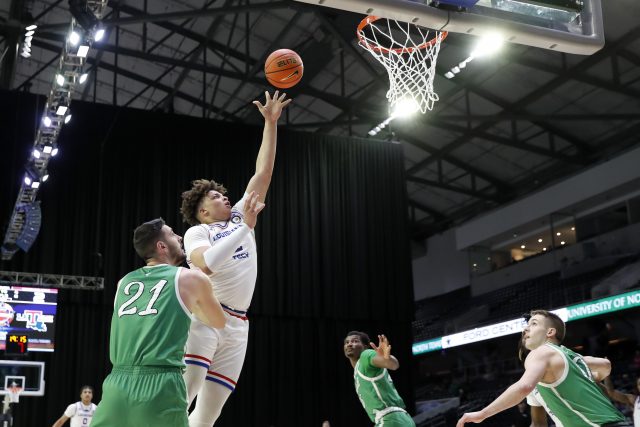 FRISCO, Texas – Louisiana Tech and Marshall were supposed to face one another on Court B at the Ford Center at The Star in the 2020 Conference USA Tournament.

After the cancellation and being on opposite sides of the brackets last season, the two teams finally matched up two years later on Court B with the Bulldogs pulling out a 77-67 victory over the Thundering Herd on Wednesday night to advance to the quarterfinals.

With a five-point advantage at halftime, LA Tech (22-9) overcame a shaky stretch of turnovers, plus a near five-minute scoring drought, to shoot 61.9 percent in the second half and score 40 points as a result in the stanza to down Marshall (12-21).

Up 44-36 after a made jumper by Amorie Archibald gave the Bulldogs their largest lead of the game thus far with 17:15 still to go in the game, the Herd took advantage of five turnovers and foul trouble by Kenneth Lofton, Jr. to go on a 7-0 run and slice the deficit down to one.

After a timeout by head coach Eric Konkol, Junior subbed back in and immediately sparked an 11-0 run after connecting on back-to-back buckets.  The run also included fastbreak layups by Kaleb Stewart and David Green as well as a corner three buried by Green to go up 55-43 with 10 minutes to go.

Despite Marshall draining 12 three-pointers in the game, the ‘Dogs dominated the paint to the tune of 42 paint points.  The duo of Junior and Kenny Hunter combined to score 11 straight points after the run to maintain a healthy lead.

LA Tech ended up putting the game away at the free throw line, sinking 12 of their 15 shots at the charity stripe in the second half (went 15-of-18 for the game).

The first half was a game of runs as well as the Herd used an 8-0 run to help build an early 14-9 lead.  The Bulldogs later countered with an 8-0 run as well as a 9-0 run by Keaston Willis alone.

LA Tech shot 50.9 percent from the field as a team as Junior finished with a team-high 21 points and nine rebounds.  Willis and Cobe Williams added 18 and 10 points, respectively.

Marshall was limited to just 37.9 percent shooting from the field (, getting a combined 45 points from Taevion Kinsey and Mikel Beyers.

“We played against a Marshall team, which is one of the toughest covers.  They are so dangerous in so many ways with how they stretch the floor.  We had a lot to discuss yesterday and today with how we were going to guard them.  It had been a long time since we had played them.  They got off to a hot start from three, but I thought our guys did a nice job of settling in defensively.  We got some good offensive baskets as the game progressed.”

·        Kenneth Lofton, Jr. tied the program record for most points scored in a C-USA Tournament game with 21.  It was his ninth 20-point performance of the season.

LA Tech will take on the No. 2 East seed WKU on Thursday night at 6 p.m. CT on Court B at the Ford Center at The Star.  The quarterfinal matchup will be streamed live on Stadium.